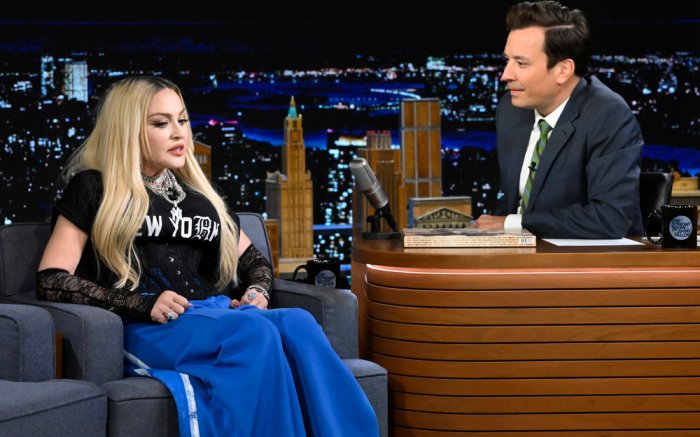 Madonna merged her own iconic style with sporty separates on Thursday to appear on “The Tonight Show Starring Jimmy Fallon.”

The multi-hyphenate sat down for a two-part interview with Fallon, arriving in a black R13 T-shirt with white “New York” lettering. Giving her outfit a casual finish were blue track pants with vertical white stripes.

However, Madonna also referenced her own signature ’80s style, pairing the pieces with a cinched black lace corset, matching fingerless gloves and stacks of sparkling diamond bracelets and necklaces. Finishing her ensemble were diamond rings and cross-shaped drop earrings — as well as the metal grill she designed for herself, ahead of her 64th birthday.

When it came to shoes, the award-winning musician’s footwear wasn’t visible. However, it’s likely she finished her look with sneakers or high heels; both pairs are ones she’s been spotted in her grunge-inspired outfits.

“This interview is going to be all about flirtation and seduction,” Madonna joked with Fallon, discussing her upcoming record “Finally Enough Love,” the potential to host his show and her dream of collaborating with Kendrick Lamar. The singer also talked about a wardrobe malfunction at the first MTV Awards in 1984, which her then-manager said could end her career.

“I walked down these very steep stairs of a wedding cake, and I got to the bottom, and I started dancing around — and my white stiletto pumps fell off,” Madonna shared. “I was trying to do this smooth move, like, dive for the shoe and make it look like it was choreography, and my dress flipped up and my butt was showing.”

Madonna also took the opportunity to perform her song “Music” with Fallon and his band, The Roots, on their “Classroom Instruments” segment.

When it comes to shoes, Madonna’s styles are often bold and boundary-breaking. A muse for designers including Christian Louboutin, the “Material Girl” singer often wears peep-toe and platform pumps on the red carpet — as well as daring over-the-knee boots. Her performance ensembles usually feature boots with shorter heels in knee-high or over-the-knee silhouettes. When off-duty, the singer usually wears flatter-soled leather boots, as well as Nike and Puma sneakers.

Discover Madonna’s style evolution over the decades in the gallery.