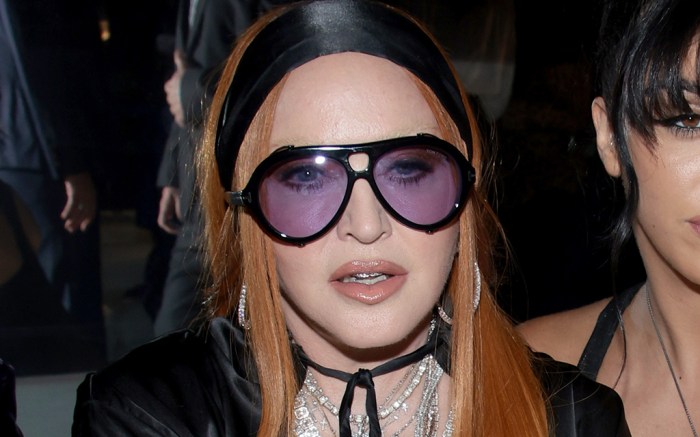 Madonna took head-to-toe Balenciaga out for a spooky night on the town — with boots to match. While at a restaurant with actor Henry Chesley on Instagram, the iconic musician snapped photos while drinking wine and posing with Chesley, a wall painting, and a range of Halloween pumpkin decor.

When it came to footwear, the Grammy Award-winning musician opted to finish her outfit with Balenciaga boots — in fact, a style inspired by the brand’s own hit handbag line. Her Cagole pair — named after Balenciaga’s handbag line of the same name, which it also matches with the same accents — featured a knee-high silhouette in mirrored silver leather. Triangular pointed toes and 3.54-inch stiletto heels finished the set, as well as Cagole-esque silver studs, buckles, stitching and knotted leather straps. The set appears to be unreleased at the moment; however, the shoes are available in black, pink and neon yellow colorways on Balenciaga’s website.

Madonna is renowned for her edgy and groundbreaking personal style, both in her own right and as a muse for designers including Ford, Jean Paul Gaultier and Jeremy Scott. Her footwear follows an equally sleek and edgy route, often consisting of pointed-toe and platform pumps and boots on the red carpet from brands including Christian Louboutin, Stella McCartney and Chanel.

Off-duty, Madonna can be seen in a range of sneakers and boots from brands including Nike and Puma. A frequent Met Gala attendee, Madonna is known for making bold fashion statements and has also launched her own fashion projects over the years. These have included an M by Madonna H&M collection (2007), the MDG sunglasses line with Dolce & Gabbana (2010), teen fashion line Material Girl (2010), and a fashion line, Truth or Dare (2011) — with shoes created in partnership with Aldo.

PHOTOS: Discover Madonna’s style evolution over the years in the gallery.