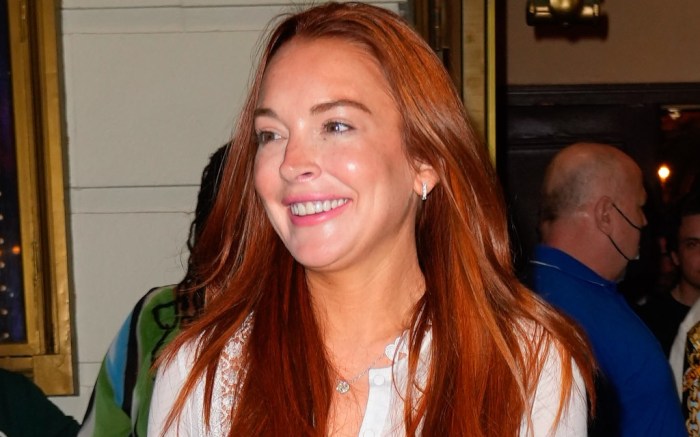 Leave it to Lindsay Lohan to master the art of self-references. The actress’ latest dose of nostalgia comes from a 1998 photo she re-created with her younger brother, Dakota, in front of Big Ben in London.

In the original 24-year-old photo, the “Confessions of A Teenage Drama Queen” star wears a yellow and white gingham-print jacket and skirt — similar to those worn in the movie by one of her characters, Hallie — while holding a one-year-old Dakota. In the duo’s 2022 shot, which both Lohans shared on Instagram, Dakota holds her in a similar pose; for the occasion, the actress wore black leggings with a cream sweater and unbuttoned beige trench coat.

When it came to footwear, Lohan opted for practicality in a set of black athletic sneakers. Her style appeared to feature mesh uppers with capped leather toes, as well as a lace-up silhouette. Exaggerated white soles completed the set, which were ideal for a day of playing tourist in the UK.

The look was a stark departure from Lohan’s most recent ensemble, which she shared a photo of in an Instagram mirror selfie: a sunshine-toned Hermés crop top, skirt and jacket, paired with sheer tights and pointed black leather pumps.

Lohan’s return to the spotlight has been notably rising throughout the year. Since January, she’s starred in a viral Planet Fitness Super Bowl commercial, narrated the reality series “Lovestruck High” and launched her podcast “The Lohdown.” Lohan is also preparing for an acting return, starring in Netflix’s upcoming holiday movie “Falling for Christmas” and thriller film “Cursed.” On the footwear front, she recently starred in an Allbirds campaign for the brand’s sustainable Tree Flyer sneakers.

When it comes to shoes, Lohan’s styles run the gamut between edgy and bohemian. The multi-hyphenate is known for wearing studded and metallic strappy sandals and pumps on the red carpet from numerous top brands, including Christian Louboutin, Giuseppe Zanotti and Valentino. Her off-duty styles encompass similarly statement-making pairs, including Prada, Saint Laurent and Louis Vuitton ankle boots, plus thigh-high styles by Givenchy and Isabel Marant. Lohan has been a reigning figure in fashion as an early 2000’s pop culture fixture, as well as a Fashion Month regular and campaign star for Miu Miu, Fornarina and Dooney & Bourke over the years.