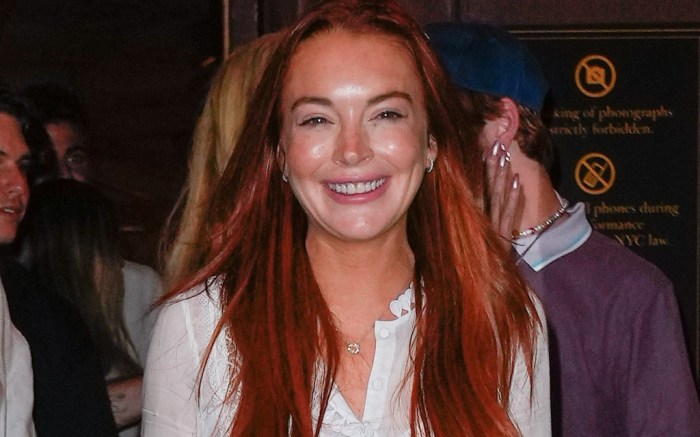 Lindsay Lohan is continuing her return to the spotlight — this time, with a new Netflix project.

While teasing the masses with a mirror selfie in her dressing room, the “Parent Trap” star wore a yellow curry crop top and high-waisted miniskirt by Hermés, which each featured a thin diamond-shaped texture. Shrugged off one shoulder, a jacket in the same color and print — which appeared to include leather paneling, a trench belt, and silver hardware — completed her outfit.

Lohan created a layered ensemble by slipping sheer black tights underneath and added a stacked ring and bracelet for a gleaming touch.

“Happy Monday! Have a great week!” the actress captioned the photo, along with a kissing emoji.

Lohan’s footwear of choice for her Netflix outing appeared to be shockingly sharp pumps. Her set featured black leather uppers, complete with triangular toes that ended in a daring point with metallic silver caps. Finishing the style were likely stiletto heels totaling 3-4 inches in height, which have been part of the classic silhouette for years. The set added a sophisticated finish to the “Mean Girl” actress’ outfit, while simultaneously streamlining it as well.

However, this isn’t Lohan’s only sharp footwear moment in recent weeks. The actress was spotted earlier this summer in Ferragamo’s black leather bow-topped Viva pumps while out in New York City, attending a Broadway show with her family.

Lohan’s return to the spotlight has been notably rising throughout the year. Since January, she’s starred in a viral Planet Fitness Super Bowl commercial, narrated the reality series “Lovestruck High” and launched her podcast “The Lohdown.” Lohan is also preparing for an acting return, starring in Netflix’s upcoming holiday movie “Falling for Christmas” and thriller film “Cursed.” On the footwear front, she recently starred in an Allbirds campaign for the brand’s sustainable Tree Flyer sneakers.

When it comes to shoes, Lohan’s styles run the gamut between edgy and bohemian. The multi-hyphenate is known for wearing studded, metallic and sharp strappy sandals and pumps on the red carpet, hailing from top brands including Christian Louboutin, Giuseppe Zanotti and Valentino. Her off-duty styles encompass similarly statement-making pairs, including Prada, Saint Laurent and Louis Vuitton ankle boots, plus thigh-high styles by Givenchy and Isabel Marant. Lohan has been a reigning figure in fashion as an early 2000’s pop culture fixture, as well as a Fashion Month regular and campaign star for Miu Miu, Fornarina and Dooney & Bourke over the years.

Sharpen your next outfit with black pumps.