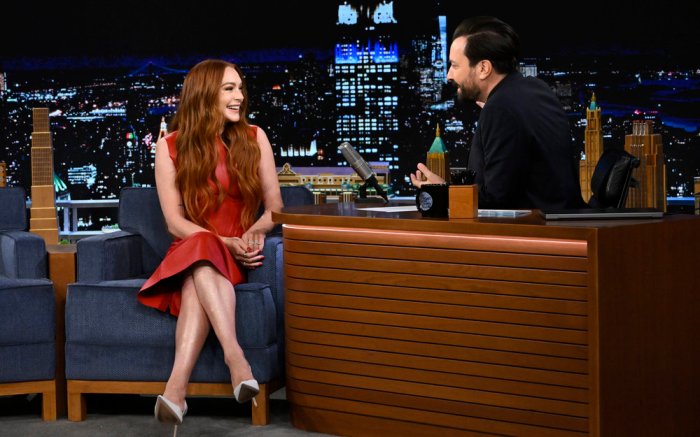 Lindsay Lohan mastered the art of self-reference — and holiday dressing — while appearing on “The Tonight Show Starring Jimmy Fallon.”

While backstage at “Fallon,” Lohan filmed an Instagram Reel with a viral TikTok noise — the use of her own “I’m ready!” audio from “Freaky Friday,” the 2003 body-swap comedy she starred in with Jamie Lee Curtis. The technique involved using the sound when opening a door to reveal a new outfit, which the “Parent Trap” star certainly did: a vibrant red leather Christian Siriano dress, paired with white pointed-toe pumps.

Her Law Roach-styled ensemble was preceded by a black minidress with a cutout bodice accented by crystal stars, paired with black leather pumps, packing the power of two stylish ensembles in one clip — and creating a full-circle moment in the process.

Lohan’s appearance marks her latest while promoting her new romantic comedy, Netflix’s holiday film “Falling for Christmas.” So far this week, Lohan has made headlines for her vibrant ensembles worn while conducting interviews on programs like “Good Morning America,” “Live with Kelly and Ryan” and “The Drew Barrymore Show.” During a screening of the film in New York City, she also made waves in a sheer floral-embellished Valentino gown, paired with shiny gold platform heels.

When it comes to shoes, Lohan’s styles run the gamut between edgy and bohemian. The multi-hyphenate is known for wearing studded, metallic and sharp strappy sandals and pumps on the red carpet, hailing from top brands including Zanotti, Louboutin and Valentino. Her off-duty styles encompass similarly statement-making pairs, including thigh-high and ankle boots by Prada, Saint Laurent, Givenchy and Louis Vuitton. Lohan has been a reigning figure in fashion as an early 2000’s pop culture fixture, as well as a Fashion Month regular and campaign star for Miu Miu, Fornarina and Dooney & Bourke over the years. This year, she’s also starred in an Allbirds campaign for the brand’s sustainable Tree Flyer sneakers.