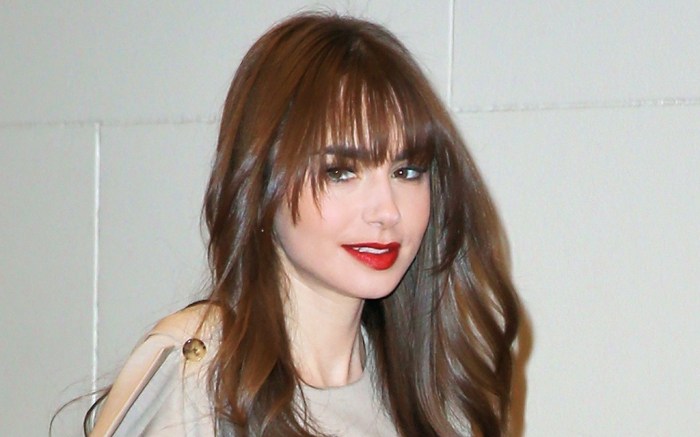 Lily Collins’ latest look was effortlessly chic — with a sultry edge from ultra-trendy footwear — for a “CBS Mornings” appearance in New York City on Tuesday morning.

The “Emily in Paris” star arrived in the Big Apple for an interview with hosts Gayle King and Nate Burleson, wearing an ensemble in the effortless French chic aesthetic. The actress strolled into CBS Studios in a sharp beige trench dress, featuring long sleeves with wide cuffs and a peplum waist accent. Cinched with a matching tie belt, the piece was finished with buttoned shoulders and a midi-length skirt with a sleek thigh-high slit. Completing Collins’ look were delicate gold earrings and rings, as well as a black Loewe handbag and a classic red lip.

Collins’ footwear was contrastingly trendy, while remaining neutral and sharp to coordinate with her outfit. The “Blind Side” actress’ shoes of choice were pointed-toe pumps with triangular see-through silk toes for a “naked shoe” effect. Finishing the style were brown leather soles, as well as thin ankle-wrapped straps and towering stiletto heels totaling 4-5 inches in height.

During her interview, Collins discussed the choice to give none of the “Windfall” characters names, as well as her experience working with husband Charlie McDowell and what her “Emily in Paris” character Emily Cooper means to her. You can view her full interview below:

Ankle-wrapped pumps and sandals have emerged as a sleek and supportive accent during the high heel renaissance. Most pairs feature stiletto heels with thin straps that wrap around the wearers’ ankles, as seen in new styles from Téjahn Burnett, Femme LA and Schutz. Aside from Collins, wrapped JustFab, Tom Ford and Cult Gaia heels have also been worn by Ayesha Curry, Sydney Sweeney and Kendall Jenner in recent weeks.

Click through the gallery to discover Collins’ style evolution over the years.