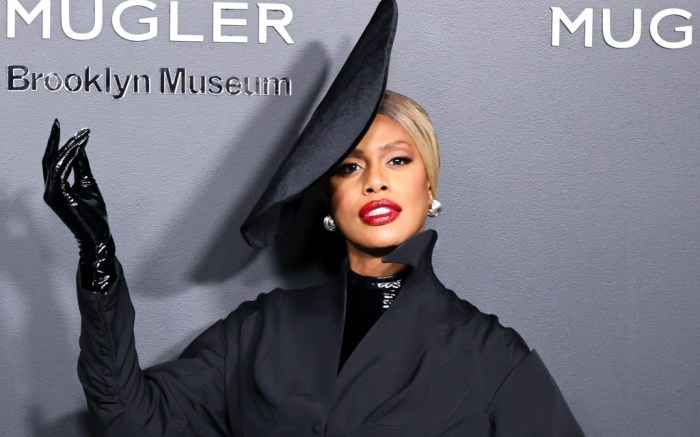 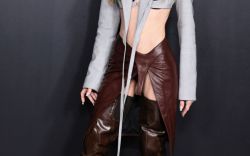 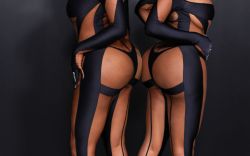 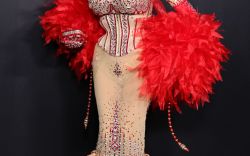 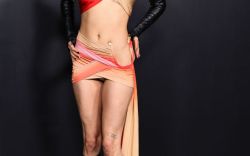 The “Orange is the New Black” star posed at the Brooklyn Museum for the occasion, wearing a dynamic Mugler ensemble. Her outfit prominently featured a charcoal black button-up jacket with a flared hem and cinched silhouette, complete with corset piping. The ensemble was finished with a matching miniskirt with a ruched side and black velvet flower accent.

Cox completed her ensemble with a black high-necked latex top and matching gloves, creating a sleek base for her more formal attire — as well as a black velvet fascinator and thick swirled silver hoop earrings.

When it came to footwear, Cox slipped on a pair of heeled boots. Her smooth style featured black patent latex uppers, catching the light through their silhouette. The pair, appearing to stretch past her skirt’s short hem in a thigh-high or over-the-knee silhouette, was complete with stiletto heels totaling at least 4 inches in height. The set brought a sultry flair to Cox’s attire, simultaneously forming a monochrome look from its dark hues.

“Thierry Mugler: Couturissime” exhibit at Brooklyn Museum in New York will officially open on Nov. 18. This is the first retrospective to explore the work of French designer Thierry Mugler, featuring over 100 outfits ranging from haute couture pieces to stage costumes, alongside custom accessories, sketches, videos, images by celebrated fashion photographers, and installations that mirror Mugler’s futuristic approach.
PHOTOS: Discover all the star arrivals at the “Thierry Mugler: Couturissime” exhibit in the gallery.