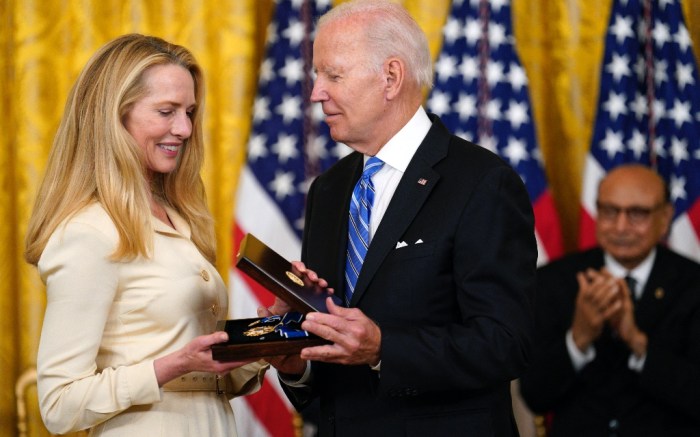 Laurene Powell Jobs was sharply dressed while accepting the Medal of Freedom for her late husband, former Apple CEO and co-founder Steve Jobs, at the award’s 2022 ceremony in Washington, D.C.

Arriving at the White House’s East Room for the occasion, Powell-Jobs wore a sharp shirtdress with a pleated skirt. The cream number featured a satin texture, as well as long sleeves, a buttoned front and a sharp collar. Completing Jobs’ formal ensemble was an attached belt with a thin gold buckle, as well as a watch with a light blue band. Though her footwear was not visible, it’s likely Jobs opted for a pair of coordinating sandals or pointed-toe pumps for the formal occasion.

Powell-Jobs’ late husband is one of 17 recipients of the honor, bestowed to Americans who have made “exemplary contributions to the prosperity, values or security of the United States, world peace or other significant societal, public or private endeavors,” according to the White House. Other 2022 recipients include Megan Rapinoe, Denzel Washington and former Congresswoman Gabrielle Giffords.

Discover Powell-Jobs’ daughter Eve and more stars at the 2022 Met Gala in the gallery.