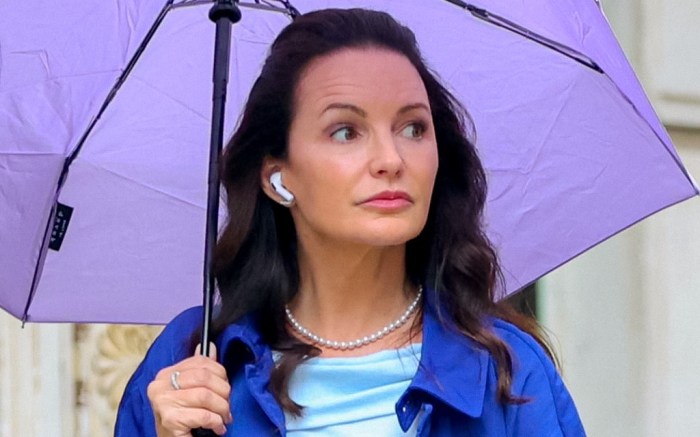 Kristin Davis beat the rainy day blues as Charlotte York Goldenblatt while filming “And Just Like That…” season 2 on Wednesday.

On set for the show’s second season in New York City with director and co-star Cynthia Nixon, Davis was spotted shooting on the program’s Instagram page in a new Molly Rogers and Danny Santiago-designed ensemble: a light blue silk blouse, tucked into a buttoned black midi skirt covered in a blue, white and green floral print. Her formal attire was layered with a cobalt blue raincoat and lavender umbrella for a weather-ready spin, as well as a string of pearls and a light blue leather Prada handbag.

When it came to footwear, the “Deadly Illusions” star‘s outfit was complete with a set of white pumps. Her style included stark leather uppers with triangular toes, completed by thin heels totaling 3 to 5 inches in height.

Davis has also returned to form as Charlotte York while filming the second season of “And Just Like That…,” with her one of her most viral outfits making the rounds online: an 18th-century-esque silk gown and jacket with a latex corset top and Amina Muaddi’s towering Yigit platform boots, inspired by “Sweet Gwendoline” by bondage artist John Willie.

“And Just Like That…” has returned to filming its second season in Manhattan as of early October, with several outfits from the new season already going viral. Sarah Jessica Parker was notably spotted outdoors in metallic pink stiletto sandals and Dior’s 2008 Extreme Gladiator sandals — complete with J.W. Anderson’s 3D-printed pigeon clutch.