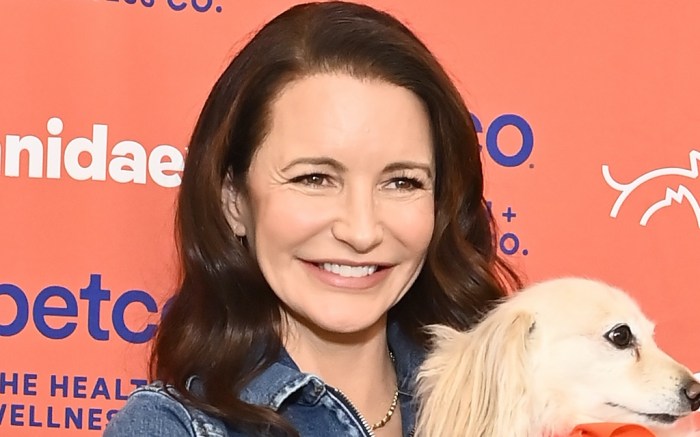 Kristin Davis dressed smoothly to celebrate the launch of sustainable pet food brand Canidae’s Kibble Refill Stations at PetCo in Burbank, California on Tuesday. The Puppy Playdate event brought together stars like Mario Lopez, Lee Asher and more—along with their pets—to usher the start of the refillable food stations, which aim to eliminate 50,000 discarded dog food bags from landfills and reduce a need for single-use plastics.

The “And Just Like That…” star arrived at the event in a sharp denim jumpsuit. The one-piece garment featured a long-sleeved silhouette with a front zipper. Davis cuffed the sleeves for a casual appearance, and paired her outfit with the ultimate accessory: dogs dressed in orange bandanas.

For footwear, the “Deadly Illusions” star paired her jumpsuit with leather boots. Though her full style wasn’t visible beneath her jumpsuits’ legs, the style featured rounded toes with black uppers. In addition to ridged soles, the style also appeared to feature block heels totaling at least 3 inches in height. Davis’ boots gave her outfit a utilitarian appearance, while also proving to be versatile for both casual and formal ensembles.

Boots like Davis’ are a season-less fall and winter trend, due to their versatile nature and ability to be worn with both casual and formal outfits. Most pairs feature rounded or pointed toes with a range of heel and silhouette heights, often crafted from neutral leathers or suedes. New styles are often released this time of year, with recent pairs launched from brands like Schutz, Sam Edelman and Kate Spade New York. In recent weeks, stars like Nicola Peltz, Katy Perry and Elsa Hosk have also slipped on sharp boots by Versace, Balenciaga and Magda Butrym as well.

When it comes to shoes, Davis keeps her other off-duty styles casual. Aside from comfy slides by Nike, the “Sex and the City” star can also be seen in Ugg boots and Golden Goose sneakers. For red carpets, Davis tends to favor pointed-toe and peep-toe pumps from brands like Christian Louboutin. As Charlotte York, photos have surfaced of her this summer in an array of stylish heels by Dior, Stuart Weitzman and Gianvito Rossi, among others.