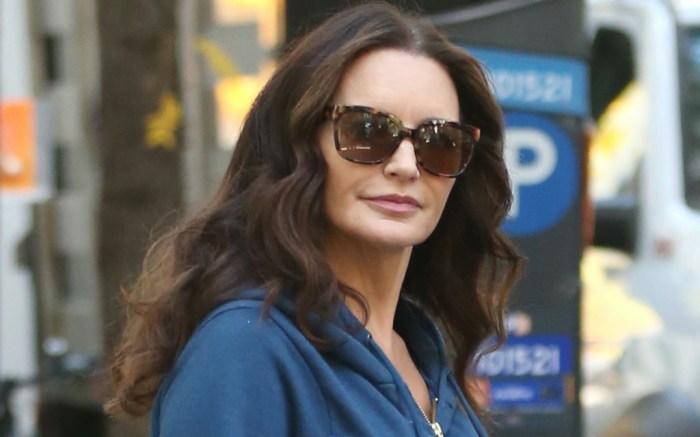 Behind the scenes of the HBO Max comedy, the actress arrived on set on Madison Avenue in New York City in decidedly casual attire. Her off-duty outfit consisted of a blue zip-up drawstring hoodie and matching sweatpants, each printed with horizontal red, orange, yellow and blue paneling. Oversized tortoiseshell-framed sunglasses and a thin ring completed her ensemble.

The outfit bore a remarkable similarity to one Davis wore while filming the show’s first season in August 2021, wearing a striped gray hoodie with sweatpants and Nike slides.

When it came to footwear, the “Deadly Illusions” star‘s outfit was complete with a cozy pair of Ugg boots. Her $170 Classic Short II style featured rounded toes and calf-high water-repellent uppers in smooth navy sheepskin with shearling trim. Giving the cozy pair a comfortable finish were sheepskin insoles and Treadlite by Ugg outsoles.

“And Just Like That…” has returned to filming its second season in Manhattan as of early October, with several outfits from the new season already going viral. Sarah Jessica Parker has already been spotted outdoors in metallic pink stiletto sandals and Dior’s 2008 Extreme Gladiator sandals — complete with J.W. Anderson’s 3D-printed pigeon clutch.