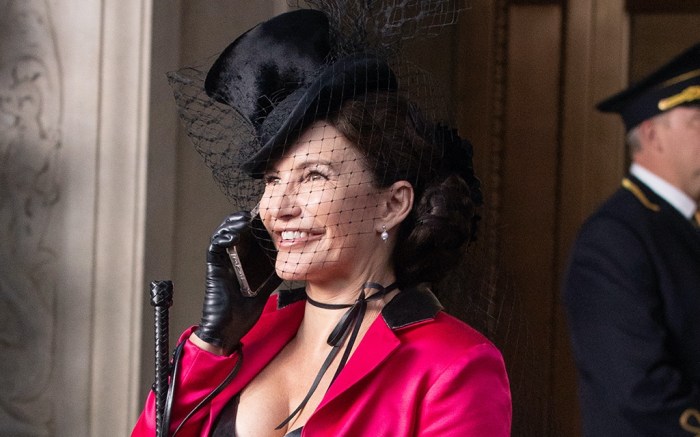 On set for the show’s second season in New York City’s Upper East Side yesterday, Davis wore a Victorian-esque outfit. Her ensemble, inspired by “Sweet Gwendoline” by bondage artist John Willie, consisted of a multicolored striped silk skirt with a rounded bustled back, similar to styles from the 1890s. Adding to her outfit’s vintage aesthetic was a fuchsia satin jacket with black leather lapels, cinched with a dark gunmetal horsebit.

When it came to footwear, the “Deadly Illusions” star‘s outfit was complete with a towering set of Amina Muaddi boots. Sharply veering from Charlotte’s classically preppy style, the $1,630 Yigit set featured glossy black patent leather uppers in a pointed-toe silhouette. Giving the ankle-high pair a sky-high boost were thick platform soles, as well as stiletto heels totaling 6 inches in height. The set finished Davis’ outfit with a daringly sharp base, while ensuring she also received added elevation.