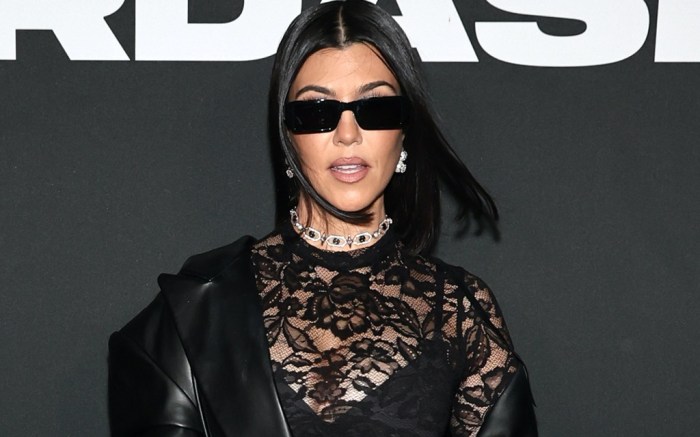 As seen on Instagram, the Poosh founder posed with mom Kris Jenner and sisters Kim and Khloe Kardashian and Kendall and Kylie Jenner in a white cutout gown.

Kourtney’s long-sleeved outfit featured a central diamond cutout, creating the illusion of a crop top silhouette. The piece’s central bodice was topped with a 3D fabric flower, and finished with a ruched miniskirt with a sweeping sheer hem. Thin vertical earrings completed her minimalist attire.

As for footwear, Kardashian appeared to slip into a set of heeled sandals. The Boohoo collaborator’s footwear appeared to include an open-toed silhouette with lightly toned uppers. Though the pair couldn’t be fully seen, Kardashian’s style was likely to completed with stiletto or block heels.

When it comes to shoes, the former “Keeping Up With the Kardashians” star‘s wardrobe includes edgy styles with trendy details. Two of Kardashian’s go-to pairs of shoes are Prada’s popular lug-sole boots and Naked Wolfe’s vegan leather platform boots. She also can be seen in pointed-toe pumps, sandals and boots by luxury brands like Tom Ford, Bottega Veneta and Giuseppe Zanotti.

The Kardashians’ Christmas Eve party was truly a family affair. Held annually, the 2022 event was attended by the full Kardashian-Jenner family, including Kim, Khloe and Kourtney Kardashian, Kris, Kendall and Kylie Jenner and North, Chicago, Saint and Psalm West. The occasion took place at Kourtney Kardashian’s home and featured a performance by Sia — which North joined during a rendition of “Snowman,” as well.

PHOTOS: Discover Kourtney Kardashian’s boldest shoe moments over the years in the gallery.