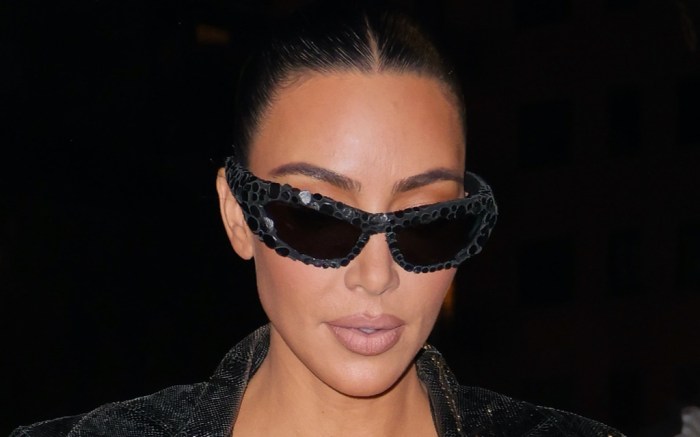 Kim Kardashian stepped out in her second full leather outfit of the day during Milan Fashion Week—while also referencing Julia Fox in the process.

One couldn’t help but notice the similarities to a previous outfit worn by actress Julia Fox—the ex-girlfriend of Kardashian’s ex-husband Kanye West—who’s also been making the rounds at Milan Fashion Week, spotted in Diesel’s Fall 2022 front row yesterday. Earlier this month, Fox stepped out in a black leather bandeau top with matching pants and a jacket for her 32nd birthday in New York City—where West gifted her and her friends in attendance Hermes Birkin handbags. The actress made a similar style choice at Diesel’s show, wearing a similar bandeau beneath a golden yellow leather jacket and matching heeled boot pants—a hybrid between a pointed-toe stiletto boot and trousers.

Though it’s unclear if the sartorial choice was intentional, Kardashian still made the look her own due to her futuristic accessories and monochrome burst of texture.

When it came to shoes, Kardashian’s footwear wasn’t fully visible beneath her pant legs. However, the glimpse viewers saw showed black leather pointed toes with reptilian textures. It’s likely the pair was coordinating pointed-toe boots or boot pants, which have become synonymous with Kardashian’s monochrome fashion era over the last several months. This year, they’ve coincidentally become synonymous with Fox’s as well. Whether the two will cross paths in Milan—or wear similar looks again—remains to be seen.

The former “Keeping Up With the Kardashians” star is known for wearing bold outfits, from see-through leggings to mesh dresses. These are often styled with pieces in coordinating hues from top brands like Balmain, Maison Margiela and Mugler. Her shoes are often trend-based and daring, ranging from sleek Balenciaga boot pants to Yeezy sneakers. She’s also been seen in vintage sandals, boots and pumps from brands like Prada, Manolo Blahnik and more over the years.