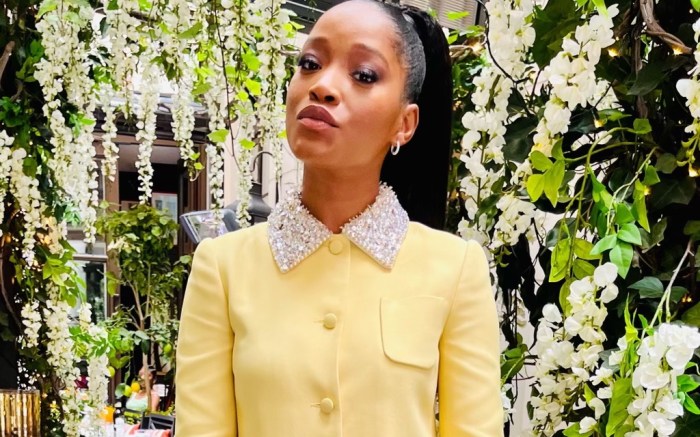 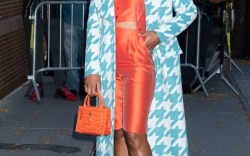 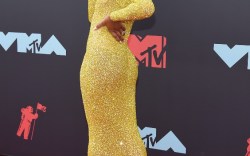 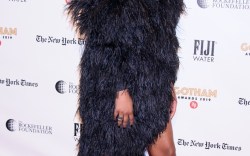 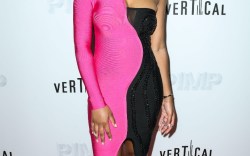 Keke Palmer brought an edge to “ladies who lunch” style this week while doing press for “Lightyear” in London. The actress stars in the new Disney animated film, which comes out on June 17, alongside Chris Evans, Taika Waititi, James Brolin and Uzo Adoba.

While posing during the movie’s press circuit, Palmer wore a full Miu Miu outfit. Her ensemble included a pastel yellow button-up jacket with a silver collar that was coated in crystal embroidery. This was paired with a matching miniskirt, including a hem and waistband covered in the same sparkling detailing. Palmer’s ensemble gained a slick edge from a set of the Italian brand’s beige jersey briefs, which include a rectangular logo directly on their waistband. The “True Jackson, V.P.” star’s look was completed with small hoop earrings.

When it came to shoes, the “Scream Queens” star continued her look’s sharp trajectory in a set of bold pumps. Her pair of white heels featured faintly glossy uppers, as well as triangular pointed toes. Though the style’s heels weren’t fully visible, they likely features a stiletto silhouette totaling at least 4 inches in height to bring her outfit a sleek finish.

Metallic heels have become a facet of the statement shoe trend that’s emerged during the high heel resurgence in recent months. Pointed and open-toed pairs in shiny gold, silver and colored hues have risen in popularity for their ability to add an air of sleekness to most ensembles, as seen in new pairs by Ted Baker, Sergio Rossi, Tom Ford and Burberry. In addition to Palmer, stars including Katy Perry, Elsa Hosk and Amanda Seyfried have slipped on shiny Gianvito Rossi, Bottega Veneta and Jimmy Choo pumps as well in recent weeks.

For footwear, Palmer often gravitates towards bold pumps and sandals from Jimmy Choo, Christian Louboutin, Dior and Giuseppe Zanotti, among numerous top brands. The actress chooses more casual styles for her off-duty looks, regularly wearing sneakers by Vans and Nike. However, she’s also a supporter of independent designers like Isa Tapia and Jerome C. Rousseau, and can even be seen in affordable brands like Chiara Ferragni and ShoeDazzle.

Click to Discover Palmer’s bold shoe style over the years in the gallery.