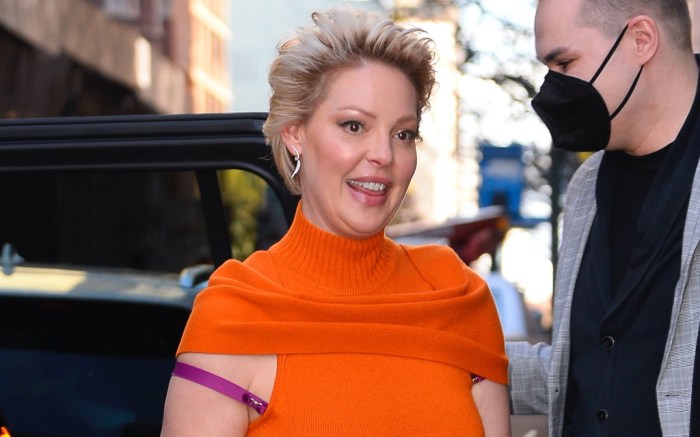 Katherine Heigl proved a girl’s best friend is a set of slick heels while arriving at the ABC studios in New York for her appearance on “The View.” The actress is currently promoting season 2 of Netflix’s “Firefly Lane,” which will premiere on Dec. 2.

The Emmy Award-winning actress arrived for the show’s taping this morning in a tonal orange knit dress by Halston, featuring a high neckline and cold-shoulder side cutouts. However, she faced a slight styling challenge while exiting her car, where a purple bra strap slipped down her arm. Heigl was quick to adjust and remedy the situation. Her ensemble was finished with a set of stiletto-heeled slouchy cream leather boots, as well as her own red Hermés Birkin handbag with gold hardware.

While leaving the talk show’s studios later in the afternoon, Heigl changed her outfit to a deep red suit. Her ensemble featured a double-breasted blazer with long sleeves, pointed lapels and lacquered buttons atop a lacy black blouse. The set was complete with a pair of matching pleated trousers with split hems — a popular pant accent this season.

Finishing Heigl’s ensemble were curved silver and diamond post earrings, as well as her original Birkin. Adding a further festive spin to her outfit — and proving that good coffee is the ultimate accessory — was a Starbucks latté in the brand’s new green holiday cup.

When it came to shoes, Heigl opted for a slick barely-there finish with sharp pumps. The “Ugly Truth” star’s heels included clear PVC uppers with triangular toes — revealing a bright red pedicure — atop thin black soles. Thin black stiletto heels totaling at least 4 inches in height, as well as a row of crystals atop each toe, finished Heigl’s outfit with a dash of glamour. The set added a faintly edgy base to her ensemble, while utilizing neutral hues to allow her outfit to take center stage.

Heigl’s “View” appearance included an outfit change into a black dress and sparkly red slouchy heeled boots. She also shared special moments with her mother and daughter Nancy Leigh Mi-Eun Kelley in the audience, discussing her thoughts on working while parenting when she adopted Kelley — as well as the new “Firefly Lane” season and her new line of dog food. You can view her full interview now on YouTube.

For footwear, Heigl usually goes sky-high. The actress typically wears neutral, metallic or jewel-toned pumps and heeled sandals on the red carpet, hailing from top designers including Christian Louboutin, Saint Laurent, Jimmy Choo and Manolo Blahnik. Off-duty, she can also be seen in similarly hued flats from Valentino, Chloé and Tory Burch, as well as Nike, Converse and Adidas sneakers.

PHOTOS: Discover how high heels have changed over time in the gallery.