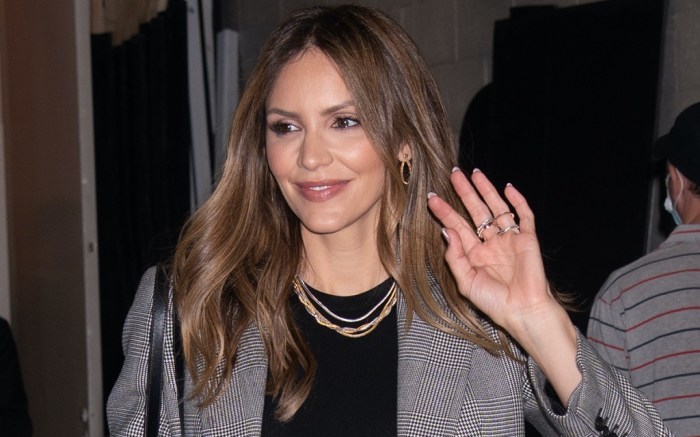 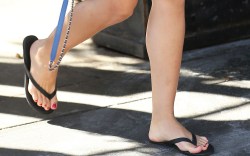 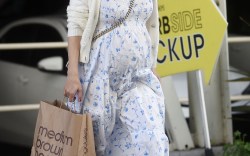 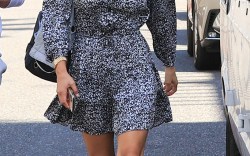 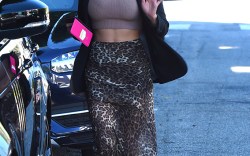 Katharine McPhee brought a classically romantic air to an interview and special musical performance with her husband, producer David Foster.

While appearing on “Live with Kelly and Ryan” with Foster, McPhee took center stage in a black silk slip dress. The sleeveless Anine Bing number featured a high neckline and midi length, appearing both bohemian and appropriately lightweight for the summer season. The actress’ exit look included a slightly oversized gray plaid blazer with sharp lapels and black buttons, as well as a large blue Burberry tote bag with black leather trim.

Completing the “Smash” star’s look was a set of layered gold and silver necklaces from her upcoming jewelry line, KMF Jewelry, as well as layered rings and several gold bracelets.

For footwear, McPhee boosted her ensemble in a strappy pair of stiletto sandals. The black leather set featured lightly squared toes, as well as thin toe straps connected by side loops to a knotted upper strap. Slingback straps and short 3-inch stiletto heels completed the pair, giving them a summer-worthy silhouette and height boost.

The actress’ footwear was also on full display for a musical performance of Foster’s song “Something to Shout About.” The duo also sat down for an interview with Ryan Seacrest and Kelly Ripa, discussing topics including their meeting on “American Idol,” romance, raising their son and a “Betty Boop” musical. You can watch their full interview below:

The star’s sandal style is a go-to silhouette for summer, where square-toed and strappy “naked” sandals are on the rise. The pair’s sultry appearance, contemporary aesthetic and ease to slide in and out of have made them especially popular, as seen in new styles by Magda Butrym, Schutz and Frame. Aside from McPhee, stars like Camila Cabello, Claire Holt and Anna Dello Russo have strapped into sleek sandals by Jacquemus, Alexandre Birman and Giuseppe Zanotti as well in recent weeks.

When it comes to shoes, McPhee opts for versatile and bohemian pairs. The “American Idol” alumni can often be seen in strappy stiletto sandals in neutral leathers, as well as metallic hues, from brands including Jimmy Choo, Cesare Paciotti and Alexandre Birman — plus affordable labels like Aldo. She’s also been seen in sparkling, PVC and printed pointed pumps from Christian Louboutin, L.K.Bennett and Rene Caovilla over the years. Off-duty, she’s been spotted in similarly sharp footwear like open-toed sandals, boots and sporty sneakers from Bruno Magli, Nike and Adidas. McPhee is also a favorite on the New York Fashion Week circuit, sitting front row for designers including Pamella Roland, Rebecca Taylor and Michael Kors over the years.

Discover McPhee’s street style evolution over the years in the gallery.