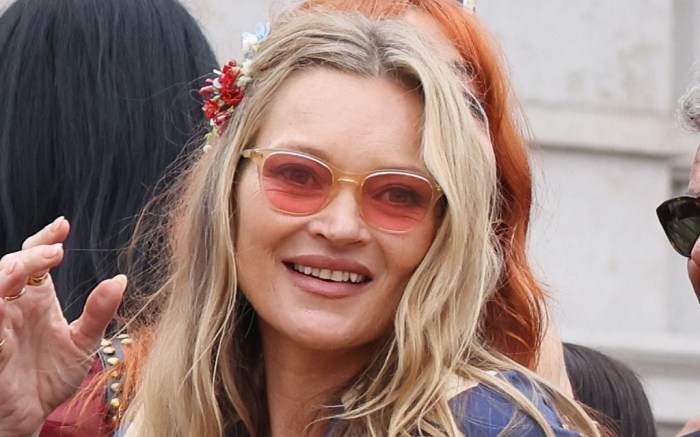 Kate Moss arrived for Queen Elizabeth II’s Platinum Jubilee, which celebrates the Queen’s 70-year-reign, in true British style — down to her shoes, in fact. The supermodel took a trip through London on a ’90s-inspired double-decker bus during the event’s Jubilee pageant, which commemorates Queen Elizabeth II’s greatest moments over the decades.

For the occasion, Moss arrived on the bus in an outfit reminiscent of the ’90s itself — one of the decades that truly defined her career. The fashion muse arrived in a black silk slip dress, which featured a bias-cut silhouette and long skirt. Layered atop was a button-up blazer printed with the country’s Union Jack flag by John Galliano — which Moss has actually worn before, during the designer’s Spring 1993 runway show, which honored Britain’s long-spanning fashion history. Completing her outfit were layers of necklaces — one finished with a massive clear crystal pendant — and red-tinted sunglasses.

Moss took the opportunity to celebrate and party with numerous fashion friends aboard the bus, including Naomi Campbell, Charlotte Tilbury, Phoebe Dynevor and Katie Grand.

Pumps like Moss’ can add a colorful flair to any outfit, due to their deep jewel tones. Her mid-height pair also proved a masterful lesson in styling colorful shoes by coordinating them with an outfit’s smaller accents — in this case, Moss’ tinted glasses and the stripes in her blazer. Aside from the “Absolutely Fabulous” actress, stars like Rachel Brosnahan, Sarah Jessica Parker and Elsa Hosk have also slipped on colorful Prada, SJP by Sarah Jessica Parker and Valentino pumps in recent weeks as well.

Discover the Platinum Jubilee’s top moments so far in the gallery.