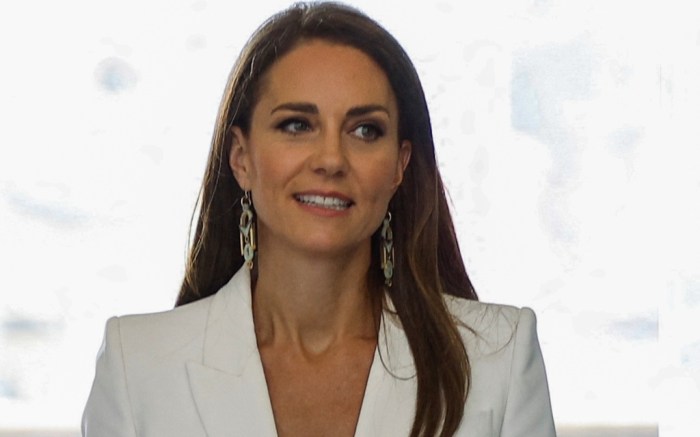 Kate Middleton was all business for the unveiling of the National Windrush Monument this afternoon.

While arriving at the London with Prince William, the Duchess of Cambridge wore a white suit by Alexander McQueen. Featuring pointed lapels and pleated trousers, the matching set was layered over a white top to create a sharp neutral statement. Completing her outfit was a white Mulberry handbag and geometric mixed metal drop earrings by Chalk. Middleton’s suit also solidified her penchant for re-wearing pieces in her wardrobe, as she’d previously donned the set earlier this season in Jamaica during the Platinum Jubilee Tour.

For footwear, Middleton continued her love of monochrome dressing with white pumps. The style featured pointed toes, leather uppers and stiletto heels totaling at least 3 inches in height. The shoes, which perfectly matched Middleton’s outfit, created a single-color effect that was both sleek and chic.

Pointed-toe pumps have emerged as a top shoe trend this year, especially as live events have returned and more people are dressing up. The style often streamlines any ensemble from its sleek silhouettes and daring heels. Middleton is the latest star to wear the style out; in recent weeks, Sarah Jessica Parker, Zendaya and Paris Hilton have also worn pairs from Manolo Blahnik, Christian Louboutin and Aquazzura.

Pointed-toe pumps are a style signature for Middleton, who’s partial to styles by Emmy London, Jimmy Choo and Stuart Weitzman. Her go-to pair is Gianvito Rossi’s 105 pumps, which she owns in five colors. In addition to her royal rotation of designer heels, the duchess also wears affordable sneakers from New Balance, Adidas, Superga and Zara.