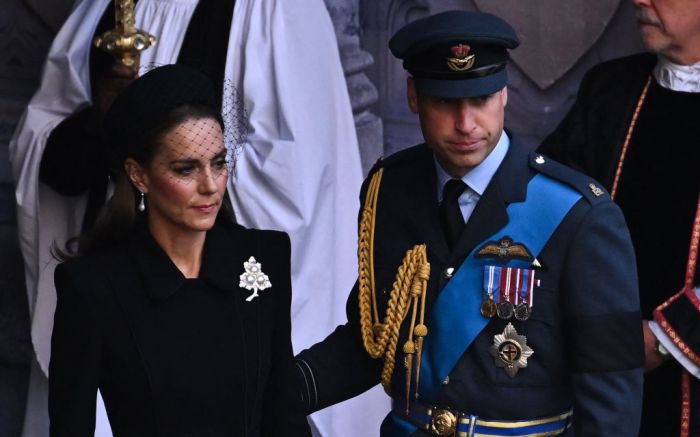 Kate Middleton joined the procession for the lying-in-state of Queen Elizabeth II in London at Westminster Abbey. Prince William’s wife was driven in a car in the company of King Charles III’s wife, Queen Camilla. They both followed Queen Elizabeth II’s coffin while it was taken by a Gun Carriage of The King’s Troop Royal Horse Artillery from Buckingham Palace to Westminster Hall.

Middleton followed the royal traditions in a somber outfit, wearing a black coat by Catherine Walker, with black tights and matching pumps by Gianvito Rossi. As per the mourning etiquette, Middleton wore a black fascinator with a veil. She accessorized with pearl earrings, a gold bracelet and a meaningful brooch. The earrings belonged to the late Princess Diana, who received them as a gift from Collingwood Jewellers before her wedding to Prince Charles in 1981.

Prince William’s wife was also wearing the Pearl and Diamond Leaf Brooch, which was part of Queen Elizabeth II’s jewelry vault. The brooch is shaped like a triple leaf, with three pearls attached.

The same brooch was worn by Middleton during the Festival fo Remembrance in 2018, and during the Passchendaele Centenary Commemoration in 2017. Queen Elizabeth II was once photographed with the same jewelry piece while visiting South Korea in 1999.

The fascinator is also a sign of respect to Queen Elizabeth. Back in the 1950s, it was considered improper for upper-class and royal women to show their hair in public. The etiquette rule has changed over the years, but it’s expected for royal women attending royal events to wear hats or fascinators.

Meghan Markle was also part of the procession. Prince Harry’s wife was in the same car as Princess Sophie.