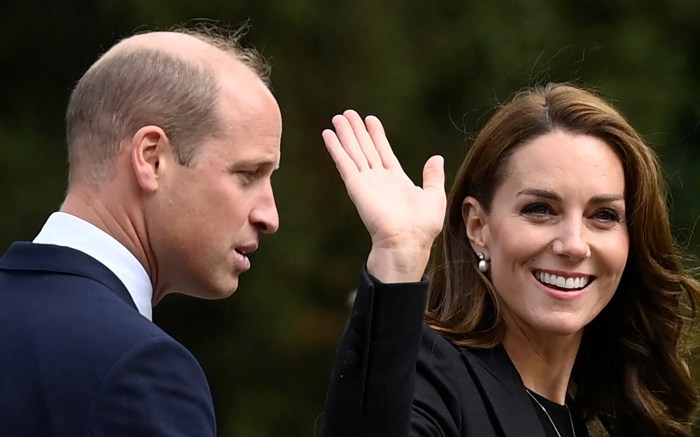 Kate Middleton, Princess of Wales, and her husband, Prince William attended a viewing of the floral tributes from mourners of  Queen Elizabeth II at Sandringham in King’s Lynn, England. The royals lined up to pay their respects clad in all-black.

Middleton carried a small black bucket bag and a pink and green crochet flower with her as she left the proceedings alongside her husband. The Princess opted for her usual black pointed-toe Gianvito Rossi pumps with stiletto heels.
The tradition of black mourning clothing started during the Roman Empire. Back then, the deceased’s family would wear a dark-colored toga as a sign of grief. This tradition persisted throughout medieval times when widows would wear black caps and veils to mourn the loss of their loved ones in England. By the late 19th century, black clothing had become associated with mourning after Queen Victoria spent 40 years wearing only black to mourn the loss of her husband, Prince Albert.

William joined his wife in a dark blue two-piece suit that he wore with a crisp white button-up top and a black tie. The Prince accompanied the outfit with black shiny dress shoes.

Buckingham Palace stated that the Queen’s state funeral will take place on Sept. 19 at 11 a.m. The Queen will lie in state in Westminster Hall for four days to allow the public to pay their respects.