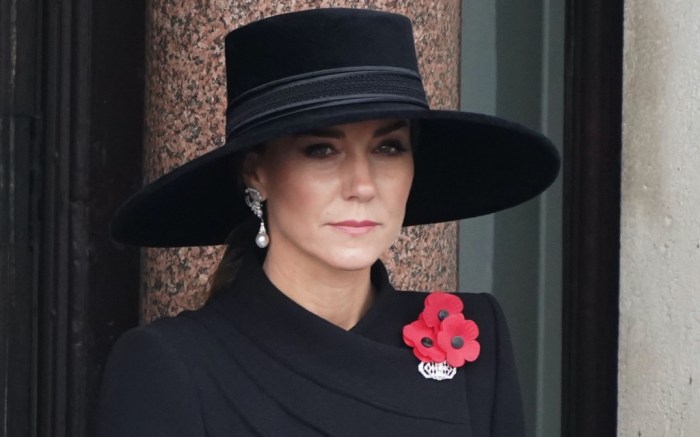 Kate Middleton was sharply outfitted for Remembrance Day in London this weekend.

While marking the occasion on Sunday at Cenotaph on Whitehall with Queen Consort Camilla, the Princess of Wales wore a black high-necked coat with a rounded wrapped front, creating a draped silhouette. The structured piece featured a slim silhouette with long sleeves. Completing the royal’s ensemble were black gloves and a wide-brimmed hat, as well as a sparkling diamond brooch. Middleton also donned three red poppy pins for the occasion — a traditional gesture to pay tribute to soldiers who have died in battle over the years.

The occasion also included two minutes of silence, which Middleton participated in with Camilla – who also wore an all-black button-up coat and fascinator accented by flowers and netting.

Though Middleton’s footwear wasn’t visible, she likely donned a pair of pointed-toe pumps with 4-inch heels — a go-to silhouette of the royal over the years, who frequently wears styles from top brands including Gianvito Rossi. However, what was visible were her sparkling diamond and pearl drop earrings, which featured a sculpted post silhouette. The pair originally belonged to the late Queen Elizabeth II, according to InStyle.

When it comes to shoes, Middleton wears pointed-toe pumps so often they’ve become her style signature, which she frequently sources from Emmy London, Jimmy Choo and Stuart Weitzman. Her go-to style is Gianvito Rossi’s 105 pumps, which she owns in five colors. In addition to her royal rotation of heels, the duchess also wears affordable sneakers from New Balance, Adidas, Superga and Zara on and off duty.