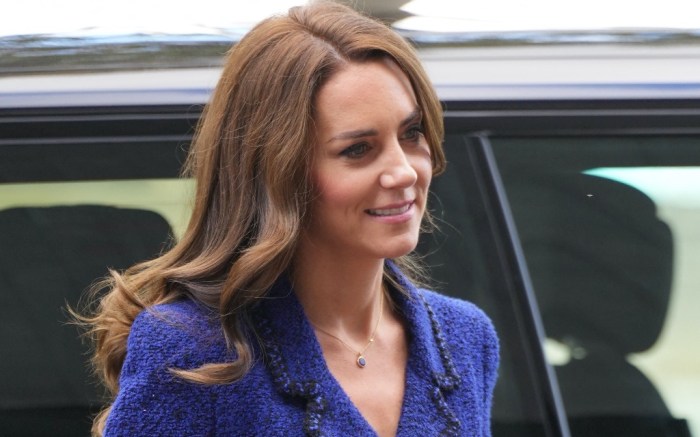 While arriving at the Copper Box arena for the occasion with Prince William, the Princess of Wales wore a vintage Chanel blazer with black trim. Hailing from 1995, the $4,698 cobalt blue piece featured pointed lapels and four front pockets. Adding to its sharpness were black and gold buttons. The piece was instantly reminiscent of Diana’s blue double-breasted blazer, worn during a September 1992 visit to South Korea. Middleton’s ensemble was complete with a round blue and gold pendant necklace and black trousers.

For footwear, Middleton opted to complete her outfit with a set of pointed-toe pumps. The style featured black suede uppers with triangular toes. Completing the set were block heels, totaling 3-4 inches in height. The style provided a streamlined boost to Middleton’s ensemble, while remaining balanced and easy to wear throughout the day. It also followed her own streak of wearing pointed styles to formal events and occasions — now regarded as a hallmark of her personal style.

When it comes to shoes, Middleton wears pointed-toe pumps so often they’ve become her style signature, which she frequently sources from Emmy London, Jimmy Choo and Stuart Weitzman. Her go-to style is Gianvito Rossi’s 105 pumps, which she owns in five colors. In addition to her royal rotation of heels, the duchess also wears affordable sneakers from New Balance, Adidas, Superga and Zara on and off-duty.