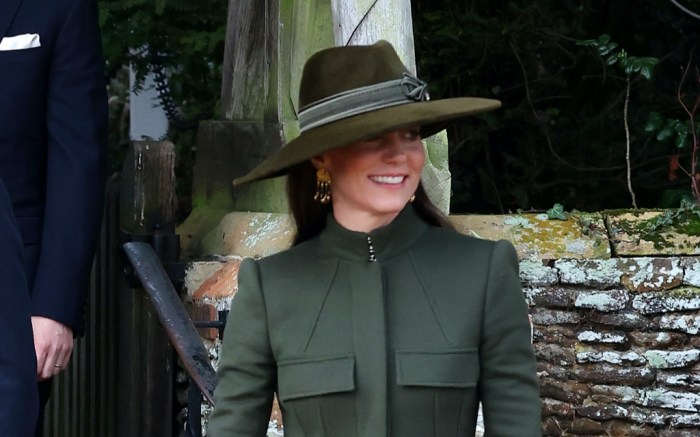 Kate Middleton was sharply outfitted to celebrate Christmas with her family — notably King Charles’ first as monarch of the United Kingdom, following his broadcasted holiday speech.

While stepping out to Sandringham Church in Norfolk for a Christmas service, the Princess of Wales sported an olive green wool coat from Alexander McQueen. She previously wore the same coat to three different events in 2020, including a visit to Bradford City Hall in London.

Her long-sleeved style featured a high collar, buttoned front and a midi-length hem. The paneled piece was likely layered atop a coordinating dress or blouse and skirt.

The royal’s Christmas outfit was complete with a matching olive green fedora, trimmed with a bow and a single striped feather, as well as a dark brown suede clutch and leather gloves. A chic bohemian finish was brought by a pair of $130 post earrings from French brand Sézane, featuring a golden coin base strung with swinging deep green and blue glass beads. Though Middleton’s style is sold out, similar earrings can be found on Sézane’s website.

Middleton’s outfit also gained a chic base from a set of brown suede boots. Cast in a similarly dark hue as her gloves and clutch, the pointed-toe style included thick block heels totaling at least 4 inches in height. The set provided a tonal finish to Middleton’s outfit while remaining timeless and versatile for everyday wear in the colder months.