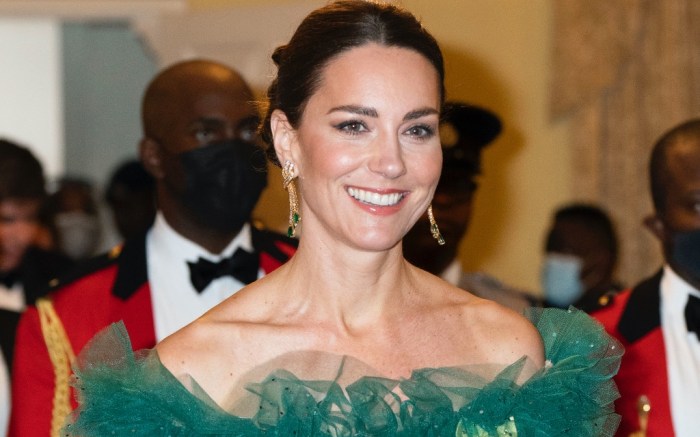 Kate Middleton used a glamorous gown to carry a strong message while attending a dinner hosted by Patrick Allen, Governor General of Jamaica, at King’s House in Kingston on Wednesday evening. The event was part of her and Prince William’s Caribbean Royal Tour while visiting Jamaica.

The Duchess of Cambridge arrived to meet Allen and his wife, Lady Patricia Allen, wearing a green gown by British designer Jenny Packham — which is also one of her go-to brands over the years. The elegant dress featured an off-the-shoulder silhouette with a ruffled tulle hem. Giving the piece a burst of glamour was a flowing, voluminous skirt, as well as a waistline accented with a spray of green crystals that fanned over the dress. Middleton’s look was finished with gold and yellow brooches, as well as a diamond and gold bangle and bejeweled knotted statement earrings. Her outfit’s green hue notably paid tribute to Jamaica, as the color is a primary part the country’s flag colors.

Middleton’s footwear wasn’t visible beneath her gown’s long train. However, the duchess likely wore her standard heels for red carpets: a pair of pointed-toe pumps in a coordinating color or metallic hue. The style likely featured pointed toes with 3-4-inch stiletto heels for a sharp finish.

The Royal Tour has found Middleton dressing in mainly red, blue and yellow pieces, with neutrals mixed in — notably similar to many flags of Caribbean countries. These ensembles hail from brands like Packham, Saint Laurent and Tory Burch. Middleton also had a glamour moment while in Belize, attending a reception at Cahal Pech Mayan in a shimmering pink The Vampire’s Wife gown.

For footwear, pointed-toe pumps have become one of Middleton’s go-to styles — particularly by British brand Emmy London. Middleton is also a fan of Gianvito Rossi’s 105 pumps, which she owns in five colors, as well as Jimmy Choo and Stuart Weitzman heels. When she’s out for more casual events, the duchess wears affordable sneakers by brands like New Balance, Adidas, Superga and Zara.

The Duke and Duchess of Cambridge’s eight-day Platinum Jubilee Royal Tour of the Caribbean will include visits to Belize, Jamaica and the Bahamas on behalf of Queen Elizabeth. The occasion — notably similar to the Queen’s first visit to Jamaica in 1953 — is also a prime opportunity for the pair to champion causes like the Earthshot Prize. Middleton’s  sharp shoe wardrobe has been prominently on display throughout, featuring pointed-toe pumps and sandals from brands like Emmy London, Aquazzura and Stuart Weitzman.

Click through the gallery for more of Middleton’s chic style moments throughout the years.