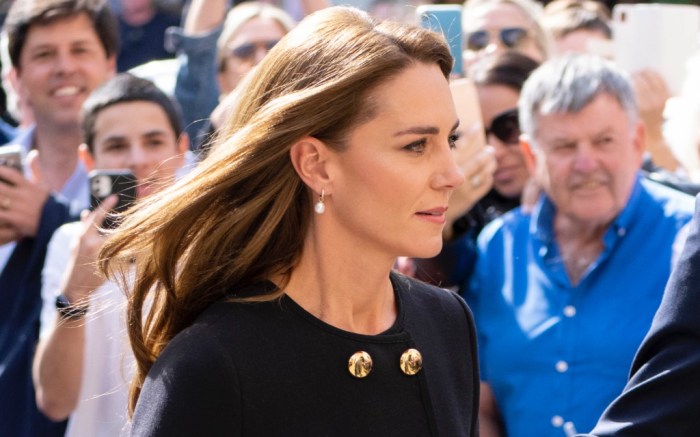 Kate Middleton is partial to a sharp pair of pumps — after all, pointed-toe styles have been in the Princess of Wales’ rotation for years. However, the cause for how she wears the style for hours on end has been revealed, thanks to Alice Bow.

In July, “My London News” published an article on Middleton’s penchant for sleek footwear — and the secret to wearing them for long periods of time. The piece included quotes in a 2018 “Insider” article from royal etiquette expert Myka Meier, who shared that the royal often wears John Lewis’ sheer non-slip tights to keep her feet inside of her heels; styles, which range from $5-$6 on Lewis’ website, include thin gel strips on their bases for added traction. Meier also shared that Middleton regularly wears Alice Bow insoles, $27-$29 leather insoles that cushion the soles of one’s feet for added comfort.

Alice Bow designer Rachel Bowditch thanked the magazine on Instagram for the occasion, sharing how the brand’s soles are still made by hand in their London studio. The brand began from Bowditch herself looking for comfortable insoles when those in her go-to Isabel Marant pumps began to crack, she has said, and the replacement styles she found had no sole padding; she later launched the brand after taking intensive Cordwainers shoe-making courses.

“We’re proud to be helping to continue the legacy of women’s footwear production here in Hackney,” Bowditch shared in the caption.

Indeed, insoles and non-slip tights are two techniques that can allow high heels like Middleton’s, which usually include stiletto heels and pointed toes, to be worn more easily and comfortably. Most styles often feature thin leather soles, which have the potential to be slipped on and off throughout their duration of wear.
PHOTOS: Discover Middleton’s top shoe looks over the years in the gallery.