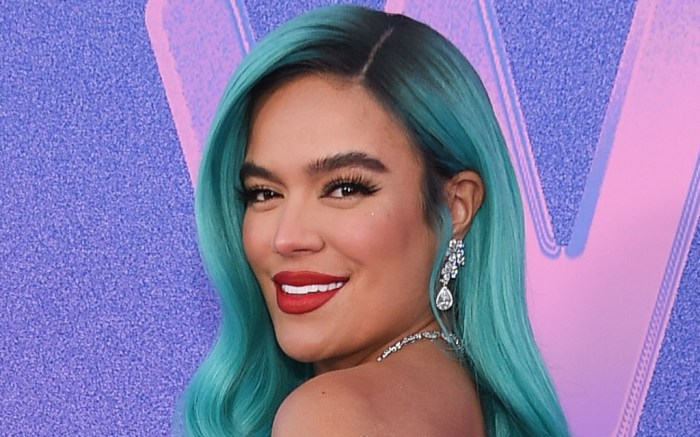 Karol G looked to Julia Roberts when dressing for the 2022 Billboard Women in Music Awards at the YouTube Theater in Los Angeles’ Hollywood Park. The star posed on the red carpet with numerous female music stars, including Normani, Banks, Christina Aguilera and more.

The “Tusa” singer hit the red carpet in an outfit instantly reminiscent of Roberts’ iconic 1990 romantic film, “Pretty Woman.” The Crocs collaborator paid tribute to Roberts in a flowing red off-the-shoulder gown, which she teased by sharing a movie still of Roberts on social media. Her gown received a modern-day update with a sheer skirt, ruching and a gleaming sheen that caught the light. Similarly to Roberts, Karol G accessorized with long white silk gloves and sparkling diamond jewelry.

When it came to shoes, the “Don’t Be Shy” singer channeled further glamour in a glitzy pair of pumps. The style featured pointed toes with ankle straps and stiletto heels, all covered in dazzling crystals. The pair made a glamorous statement when paired with Karol G’s formal gown and accessories. The pair was reminiscent of new embellished styles by Jimmy Choo, Kurt Geiger and Badgley Mischka, which have grown in popularity during the current high heel renaissance.