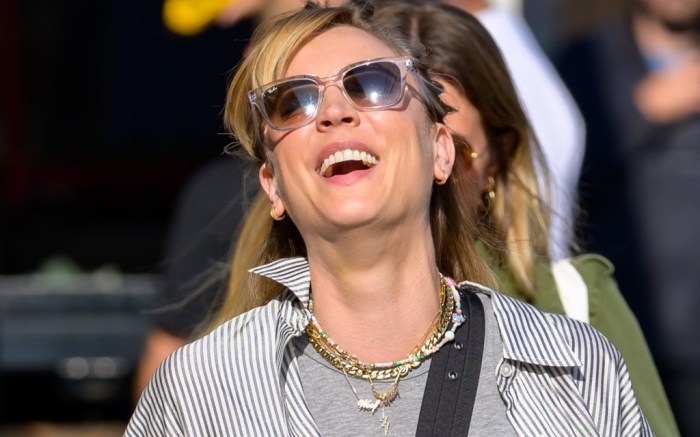 The “Flight Attendant” star arrived on-set on Wednesday in a red T-shirt, layered beneath a large white and navy pinstriped shirt. Her accessories were similarly vintage-inspired, including a pair of clear-rimmed Ray-Ban sunglasses and a cluster of gold and multicolored beaded necklaces. The star further accessorized with gold and enamel rings, plus layered beaded bracelets — some reading phrases, including “Dumpy” after her elder pet chihuahua. Delicate diamond huggie earrings, a large pink butterfly clip and a woven brown leather Bottega Veneta belt bag topped off her look.

Perhaps making the greatest statement, however, was Cuoco’s choice of denim. The actress paired her tops with a pair of pale blue wide-leg jeans that flowed around her legs, instantly reminiscent of vintage “mom jeans.” Giving the pair a grungy edge were distressed hems, knee seams and light waist distressing. The style added a hint of edge and cemented Cuoco’s outfit as purely casual.

Cuoco grounded her casual ensemble in comfy fashion, slipping on slides from APL. The “Crimes of Fashion” actress’ pair — the brand’s popular TechLoom Knit style — featured flat contoured footbeds, cushioned soles and knit “APL”-branded straps. Giving the style a whimsical burst was a silver color palette and the wide straps’ sparkly palette, creating a glamorous yet comfortable shoe statement. Though Cuoco’s style appears to be sold out, other pairs can be found on Nordstrom.com.

“The Big Bang Theory” star later changed back into her APL slides while wearing a gray T-shirt to leave the studio.

Sneakers like Cuoco’s are an easy way to add a pop of color to one’s casual wardrobe while remaining chic and comfortable. Pairs with monochrome neutral or tonal suede and leather uppers can easily be worn with outfits ranging from dressy to casual — much like new styles from a variety of brands, including Allbirds, Cariuma and Valentino. Aside from Cuoco, stars including Olivia Wilde, Naomi Watts and Julianne Hough have also laced into sharp sneakers by New Balance x Staud, Golden Goose and Loewe in recent weeks.