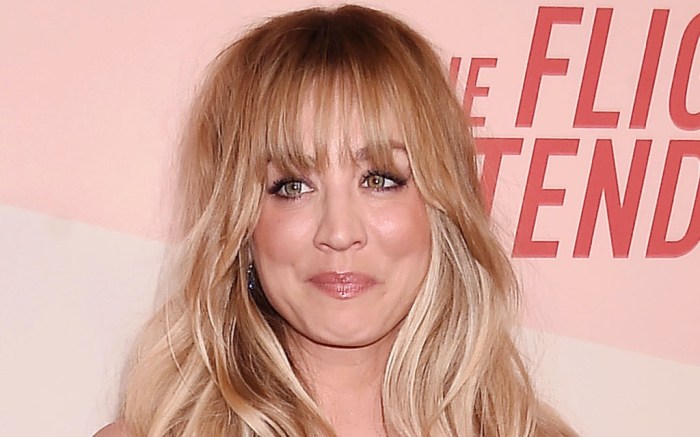 Kaley Cuoco opened up in Glamour’s April issue, donning sleek style to share details on her personal life and the new season of HBO Max’s “The Flight Attendant.”

On the magazine’s cover, Cuoco gave suiting a sleek makeover in a white suit and plunging bra by Fendi. Giving the set a geometric touch were thin gold hoop earrings, all styled by her longtime stylist Brad Goreski. Within the issue, she shared her thoughts on being seen differently from her lead role in the dramatic thriller series, compared to her longtime role as Penny in comedy show “The Big Bang Theory.”

“I’m at a different stage in my life where I really just want to do great work. That’s the most important to me,” Cuoco tells writer Jessica Radloff. “And to work with great people and build my company. So how other people reacted or responded didn’t affect me because I was still the same. I’ll maybe have different dogs around, but I’m not going to change who I am.”

The monochrome white aesthetic continued for one of Cuoco’s second looks: a cutout Prabal Gurung dress. Featuring short sleeves and a flared midi-length skirt, the dramatic piece was given a breezy finish with chunky Jenny Bird earrings and white leather Manolo Blahnik loafers.

Elsewhere in the issue, Cuoco could be spotted behind the scenes in a variety of ensembles. The “Authors Anonymous” actress also slipped on numerous sharp tonal looks, including a black bandeau top and maxi skirt by Vera Wang, yellow Jonathan Simkhai dress and pale orange top and coat by Hermes. All were punctuated by chunky sculptural jewelry from Jennifer Fisher and Agmes.

Within the accompanying editorial, Cuoco also took the opportunity to discuss happiness, moving on from divorce and finding peace — including the ups and downs of daily life in the wake of her recent divorce.

“Some days I’m like, ‘Wow, today’s great.’ And then I have a really bad day and I fall apart again,” Cuoco tells Radloff. “You have to believe and keep going. The fog always lifts right when you think you truly can’t see where you are, but then boom—there’s your perfect distance.”

Discover Cuoco’s top shoe moments over the years in the gallery.