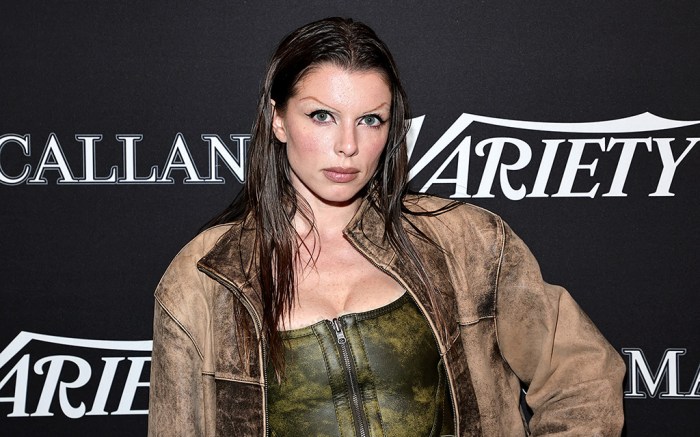 Julia Fox’s latest TikTok video put her fashion design skills to the test for the apocalypse.

“I’m gonna give you guys some end of the world fashion inspo today,” Fox began narrating in her latest clip. “It’s no secret that towels have made their way onto the runway, so today we’re gonna cut up this towel and make it a dress.”

In the video, Fox demonstrated how to cut apart a towel — hers being a blue and white Hawaiian floral-printed piece — to create a minidress, which she safety-pinned to create a draped effect.

Though the DIY moment appeared to surprise many social media users, it actually put Fox’s design skills back in the spotlight. The “Uncut Gems” star originally launched her own knitwear brand Franziska Fox from 2014-15 with Briana Andalore, worn at the time by stars including Kylie Jenner and Lindsay Lohan. Her video also proved the star’s nature to tap into current fashion trends; indeed, terrycloth textures and robes were seen in recent collections from brands including Jacquemus, Zimmermann and Bottega Veneta.

Fox styled her DIY outfit with a pair of exaggerated black sunglasses, gloves and a structured top-handle bag. When it came to footwear, she slipped into a set of heeled black boots — a now-signature style within her penchant for edgy fashion. Her knee-high pair, appearing to feature leather uppers and a faintly slouched texture, was complete with triangular toes and thin heels totaling at least 4 inches in height. The crafty video follows Fox’s viral reveal last week, where she displayed the damage to her Hermés Birkin bag after it was apparently cut in a machete attack.

PHOTOS: Discover Fox’s edgiest style moments over the years in the gallery.