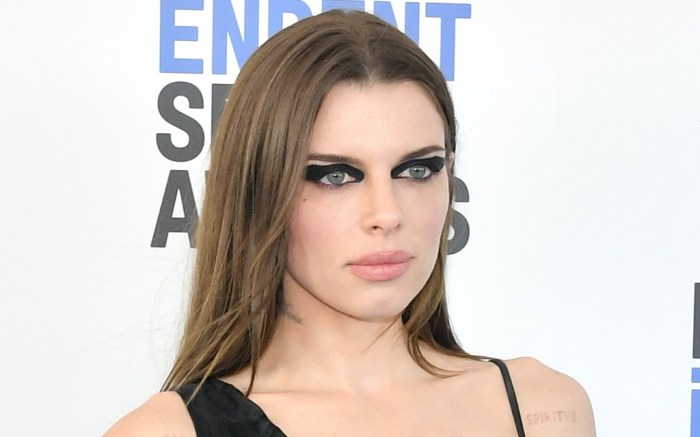 Julia Fox gave the cutout dress trend a daring twist while at the Independent Spirit Awards at the Santa Monica Pier on Sunday evening. The actress attended the ceremony with a range of stars, including Kristen Stewart, Andrew Garfield, Lily James and more.

The “Uncut Gems” actress posed on the red carpet in a daring cutout dress, which featured a one-shoulder silhouette in a silky ruched black fabric. Fox’s piece gained a utilitarian edge from numerous pocket and drawstring accents. Her look’s boldest elements came from a large hip cutout on her dress, as well as an exposed black bra on its opposite side—creating the illusion of an allover top cutout effect. Her ensemble was finished with rings, a twisted arm cuff and her now-signature heavy black eyeshadow.

When it came to shoes, Fox slipped on a pair of black leather Balenciaga boots. Her style from the French fashion brand featured pointed toes and an exaggerated heel counter, as well as sharp stiletto heels totaling 3-4 inches in height. Similar to previous pairs she’s worn, the style streamlined her look and gave it an equally sleek finish.

Boots like Fox’s are a year-round trend, with most pairs featuring knee-high to over-the-knee silhouettes for fuller coverage. Styles with pointed toes, block or stiletto heels have proven to be the most popular, as seen in new pairs by Amina Muaddi, The Kooples and Zadig and Voltaire. In addition to Fox, stars like Chrissy Teigen, Kim Kardashian and Dua Lipa have slipped on Saint Laurent, Paris Texas and Calvin Klein boots in recent weeks.