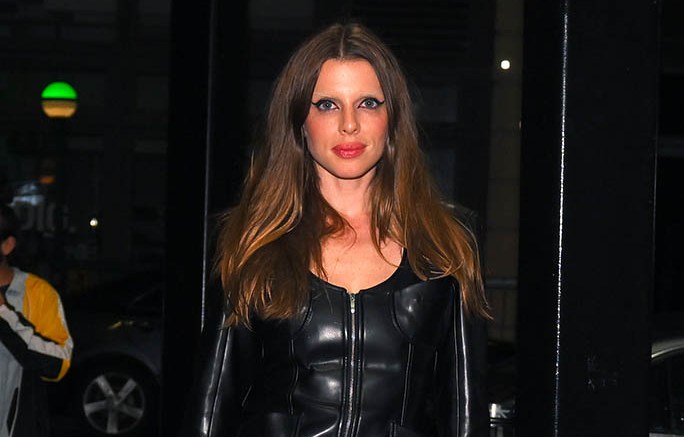 Julia Fox was on fire — literally — for her latest daring fashion moment, held on a rooftop in New York City.

In a new viral TikTok video, the “Uncut Gems” actress shared that the rooftop in question was, in fact, where she conceived her son Valentino with Peter Artemiev. For the occasion, Fox wore a black leather bodysuit with stitched detailing and a high neckline. Boots with pointed toes, short stiletto heels and a knee-high silhouette streamlined her look.

Fun fact: my son was conceived on this roof top under a full moon and we came back and made it even more magic video @bendraghi

“Fun fact: my son was conceived on this roof top under a full moon and we came back and made it even more magic video,” the actress captioned the clip.

Perhaps the most viral part of Fox’s outfit, in fact, was her long black leather coat designed by 21-year-old fashion designer Sam Macer. The reason for its popularity? She set the coat’s long train and sleeves on fire. However, Mercer has since revealed to outlets including Page Six that those parts are wrapped in stretched steel wool, which disintegrates upon catching fire at low temperatures — allowing it to be close to the wearer’s body without concern.

However, this wasn’t Fox’s only daring fashion moment in New York City this week. On Saturday, the Patou model posed at Indochine with Christine Quinn, Amelia Gray and drag performer CT Hedden in an all-black outfit: low-rise baggy pants, a bra, sunglasses and pointed-toe boots. Quinn also made a statement, wearing a ruffled yellow Aknvas dress for the occasion; fittingly, designer Christian Juul Nielsen and partner Caspar Werner were also in attendance.

Complement your ensemble with a pair of boots for a rugged appearance.