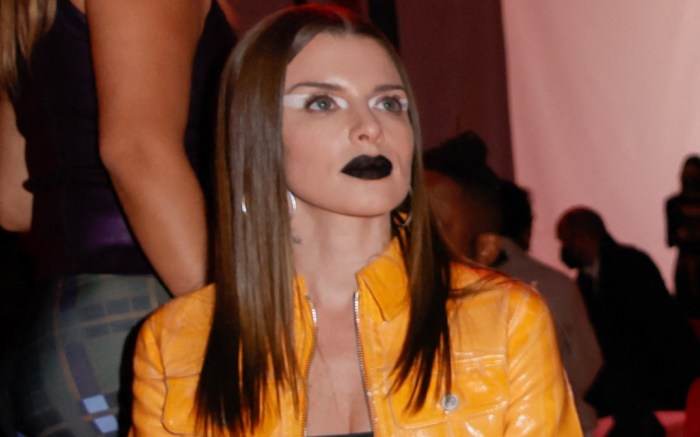 Julia Fox was boldly perched in the front row at Diesel’s Fall 2022 fashion show during Milan Fashion Week. Taking in the newest creations by creative director Glenn Martens, the actress was seated next to close friend and nightlife performer Richie Shazam and “Elite” star Aron Piper.

The “Uncut Gems” actress took a detour from her usual dark aesthetic for the occasion, wearing a punchy golden yellow leather trucker jacket with silver buttons, a sharp collar and white stitching details. The jacket was layered over a black leather bandeau top and latex gloves, giving it a slick edge. Fox completed her ensemble with a matching yellow handbag and silver hoop earrings, as well as her viral smudged eye makeup—now in a bold white palette.

Fox completed her look with one of her new style signatures: heeled boot pants. The footwear features pants and tights merged with pointed-toe heels boots, and has become synonymous with her recent makeover by ex-boyfriend Kanye West earlier this year. In the weeks since their courtship, Fox’s sleek wardrobe included numerous neutral and dark-colored stiletto boot pants and heeled boots from a range of brands, including Diesel, Schiaparelli and Balenciaga.

Boot pants are one of the most divisive new footwear trends, emerging from the aforementioned Diesel and an array of other labels—including Richard Quinn, Emilio Pucci and Saint Laurent. Most pairs, as previously stated, merge bottoms with heeled boots for a hybrid garment that can be layered with numerous pieces or worn on its own. Stars like Kim Kardashian, Hailey Bieber and Hailee Steinfeld have also stepped out in the style in recent weeks, in addition to Fox.