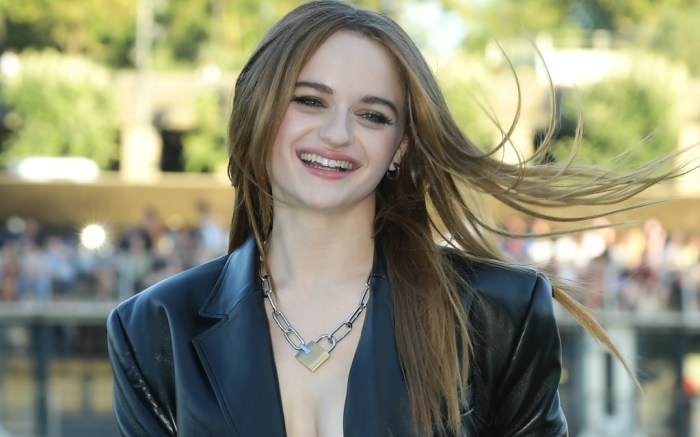 The action film stars Brad Pitt as an assassin caught on a bullet train with numerous other assassins, all vying for a mysterious briefcase. The movie — which also stars King, Brian Tyree Henry, Aaron Taylor-Johnson and Bad Bunny — premieres on August 5.

The Emmy Award-nominated actress posed with Pitt, Tyree Henry and Taylor-Johnson, as well as director David Leitch and producer Kelly McCormick, at the Bateau L’Excellence near the Eiffel Tower. For the occasion, she wore a Jared Eng-styled outfit featuring a black Didu bralette. The top, composed of thin crossed straps that formed a daring cutout silhouette, was layered beneath a black leather blazer and matching trousers by Materiel to create a slick suiting moment.

Though the “Kissing Booth” actress‘ footwear was not visible, it’s likely she boosted her outfit with a set of pointed-toe pumps or boots that coordinated with her outfit’s dark tone. However, adding a glamorously grunge twist to her look were thin layered Bondeye, Rachel Katz and EF Collection rings, as well as Melinda Maria hoop earrings covered in dark crystals. Taking center stage was a Vitaly necklace with a gold and silver-toned lock pedant, hung on a silver chain.

Discover more celebrities in bold suits over the years in the gallery.