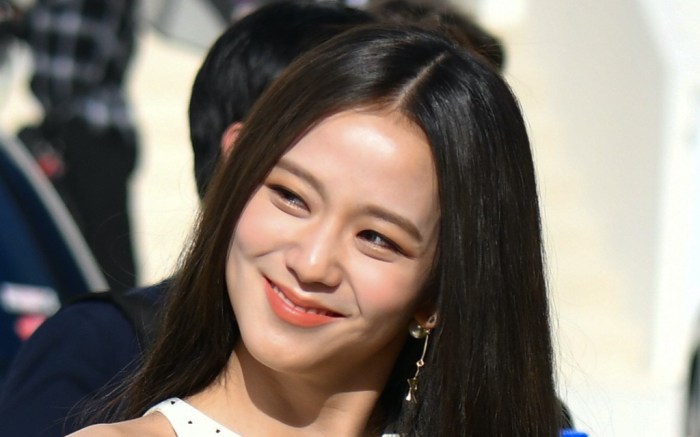 The lead cover featured the “Ice Cream” singer posing in a white collared blouse, as well as a chic skirt suit. Featuring a sharp lapeled wool blazer and matching miniskirt, Jisoo’s ensemble hailed from Dior’s Spring 2022 collection—and similarly channeled the sharpness of the ’60s. The singer’s look was complete with a dark manicure, as well as a strappy set of hybrid boots from the same collection. Featuring a knee-high lace-up silhouette with patent leather uppers, short heels and rounded toes, the style gave her look a ladylike finish—while also appearing futuristic, combining elements of gladiator sandals, boots and flats.

Jisoo slipped on a white short-sleeved minidress for a second cover, also by Dior. Her second Maria Grazia Chiuri design featured a sharp collar, as well as a black front zipper and embroidered bee and “CD” logos.

Elsewhere in the accompanying editorial, the singer donned several additional Dior outfits, consisting of green and yellow skirt suits, a belted minidress and canvas field jacket. All of her ensembles were paired with short pumps or lace-up boots — worn sans socks for an edgy, nonchalant appearance.

When it comes to shoes, Jisoo keeps her styles preppy and modern. The “Kill This Love” singer often wears loafers or brogues in neutral leathers. She can be seen in pointed-toe pumps and platform sandals from brands like Prada, Jimmy Choo and Gucci on the red carpet—though she mainly wears Dior’s footwear as their ambassador. When off-duty, she can also be spotted in sneakers by Magmur, Adidas and Yeezy.

Click through the gallery to see Blackpink’s stylish looks over the years.