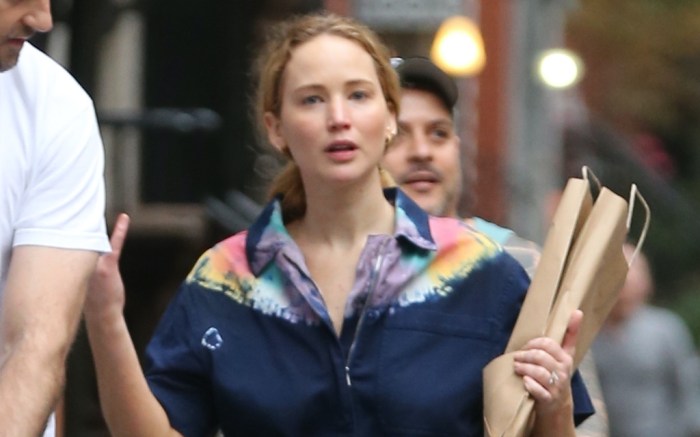 While strolling in Manhattan after a family outing with husband Cooke Maroney and their child on Sunday afternoon, the Oscar-winning actress wore a navy blue jumpsuit with short sleeves and a cinched waistline. The chic collared piece gained a playful edge from a splatter of rainbow tie-dye across its shoulders, adding a retro appeal to Lawrence’s ensemble. Her outfit was complete with a delicate silver necklace, as well as thin layered huggie earrings.

When it came to footwear, Lawrence slipped into a pair of Mary Jane-style ballet flats. Her cream leather pair included slightly squared toes and flat soles, cinched with thin buckled Mary Jane straps. The preppy pair added a dash of vintage nostalgia to her ensemble, while remaining chic and neutral for the unseasonably warm fall afternoon.

Flats like Lawrence’s are a top trend this fall, due to a rise in ballerina aesthetics and comfort-focused footwear. Though the classic style is released seasonally, brands including M.Gemi, Camper and Gucci have released new pairs in recent weeks; Sandy Liang also debuted a Mary Jane-style flat as her brand’s first shoe during New York Fashion Week in September.

In fact, Lawrence herself frequently wears the style; earlier this season, she was spotted in a high-fronted black leather pair while strolling in New York with her child.

Lawrence often makes sharp shoe statements, preferring styles that are classic and versatile. When on the red carpet, the “Hunger Games” star frequently wears pumps, sandals and wedged heels from brands including Gianvito Rossi, Gia Borghini and The Attico. Her off-duty style also includes strappy sandals and mules from The Row, Bottega Venets and Simon Miller. When casually dressing, however, Lawrence regularly wears Ugg boots and go-to slides from Oofos, Manolo Blahnik and Pierre Hardy, as well as sneakers by Reebok, Nike and Dior.