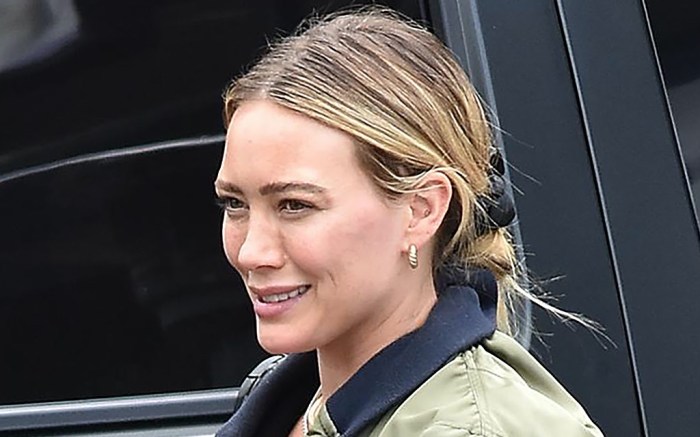 Hilary Duff took a bohemian approach to summer style this week for a girls’ night out.

The “Lizzie McGuire” star snapped a mirror selfie before going out with friends, wearing a romantic pink silk dress. The slip style featured a midi length for added coverage. Duff made the ensemble utterly cozy, however, with a long chunky cardigan in a warm beige tone. Finishing the actress’ bohemian casual ensemble was a light yellow woven Bottle Veneta shoulder bag and gold bangle bracelet.

When it came to shoes, Duff opted for a pair of strappy sandals with a trendy twist. The “Cheaper By the Dozen” actress‘ footwear included thin toe and crossed front straps. Making the pair extra sleek were squared soles, which have become a top sandal trend in the warmer months since 2020. Though her heels weren’t visible, Duff’s pair likely included 3-4-inch block or stiletto heels.

Square-toe sandals like Duff’s provide a whimsical yet sharp take on the casual heeled sandal, ideal to boost a daytime or evening look. Similar new pairs have emerged from a range of brands, including Vince Camuto, Chelsea Paris and Schutz. Aside from Duff, stars like Dakota Fanning, Rita Ora and Lorde have also worn squared Jimmy Choo, Giuseppe Zanotti and Staud sandals in recent weeks.

Strappy heels are a go-to for Duff, who’s worn them on and off-duty for years. In March, she even slipped on a black pointed-toe pair for the premiere of “How I Met Your Father.”

For footwear, Duff’s style varies between contemporary and glamorous. The “Cinderella Story” star often wears platform sandals by Jimmy Choo and Prada on the red carpet, as well as pointed-toe pumps by Aquazzura and Le Silla. Her daytime looks also feature ankle boots by Christian Louboutin, Gucci and Tibi. When off-duty, Duff can be spotted in comfortable mules from brands like Rejina Pyo and Wandler, as well.