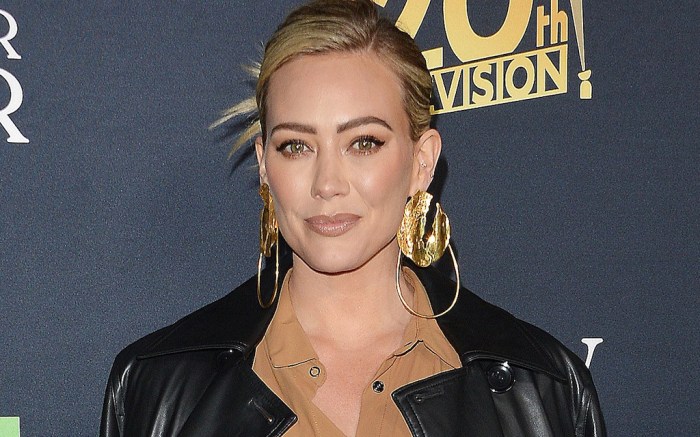 Hilary Duff has no time for negative rhetoric — especially the bullying kind, as seen in her new re-creation of her viral anti-bullying ad.

In a new collaborative Instagram Reel with Pentatonix singer Scott Hoying, the “Lizzie McGuire” star re-filmed her viral 2008 ThinkB4YouSpeak commercial with the musician and his fiancé, Mark Manio. Reprising her original role as herself, Duff corrects two girls — lip-synced by Hoying and Manio in the clip — using “gay” as negative slang. In the new video, Duff wears a purple plaid midi dress with a curved collar, cinched on the side with white bows. The whimsical piece, paired with hoop earrings, adds to her ensemble’s light-heartedness — and emphasizes the new video’s positive mission.

“a culture-defining MOMENT!” Hoying captioned the Reel, made in collaboration with Duff, along with a rainbow emoji — affirming its viral nature to the LGBTQ+ community, 14 years later.

Though Duff’s footwear was not visible in the clip, it’s likely the star completed her outfit with heeled sandals or platforms. She often wears the styles on the red carpet and at home — similarly to the metallic gold pair she slipped on in August.

In the original 2008 commercial, Duff lectured two girls at a clothing store who used “gay” as a phrase to describe something bad. Duff corrected the duo’s mean statements with a comparison to one girl wearing a skirt as a top — striking home the importance of not using cruel or anti-LGBTQ+ language to bully others. At the time, the ad was part of the “ThinkB4YouSpeak” campaign — a collaborative effort made by GLSEN and the Ad Council to combat anti-LGBTQ+ speech and bullying among youth.

“When you say, ‘That’s so gay,’ do you realize what you say? Knock it off,” Duff concluded in the commercial, which can be found on YouTube.