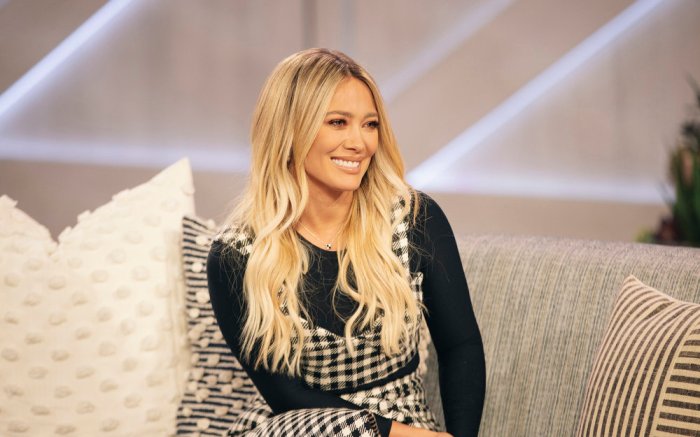 Hilary Duff brought vintage patterns out to play while appearing on “The Kelly Clarkson Show” this week.

The “Lizzie McGuire” star emerged in a black long-sleeved top layered under a black-and-white gingham-print crop top with sculpted upper cups. Styled by Brit and Kara Elkin, the top was paired with a matching midi skirt, which featured a slim fit, thigh-high slit and double-breasted button accents. A delicate pendant necklace and chunky earrings finished off Duff’s ensemble.

When it came to shoes, Duff opted for a pair of black pointed-toe pumps. The “Cheaper By the Dozen” actress‘ footwear included sharp triangular toes, as well as a sleek patent texture. The style was finished with stiletto heels totaling 3-4 inches in height, adding a sharp and streamlined element to Duff’s outfit.

During her interview, Duff shared her experiences on giving birth to her daughter, Mae, at home. You can watch her interview below on the YouTube channel for “The Kelly Clarkson Show.”

Pumps like Duff’s are a closet staple, able to bring instant sharpness to ensembles ranging from casual to formal. The most popular styles often feature neutral leather or suede uppers with stiletto heels, as seen in new pairs by L’Agence, Brother Vellies and Sam Edelman. In addition to Duff, stars like Zendaya, Ariana Grande and Bella Hadid have also worn sleek pumps by Christian Louboutin, Casadei and Burberry in recent weeks.

For footwear, Duff’s style varies between contemporary and glamorous. The “Cinderella Story” star often wears platform sandals by Jimmy Choo and Prada on the red carpet, as well as pointed-toe pumps by Aquazzura and Le Silla. Her daytime looks also feature ankle boots by Christian Louboutin, Gucci and Tibi. When off-duty, Duff can be spotted in comfortable mules from brands like Rejina Pyo and Wandler, as well.

Click through the gallery to see Duff’s top street style looks over the years.