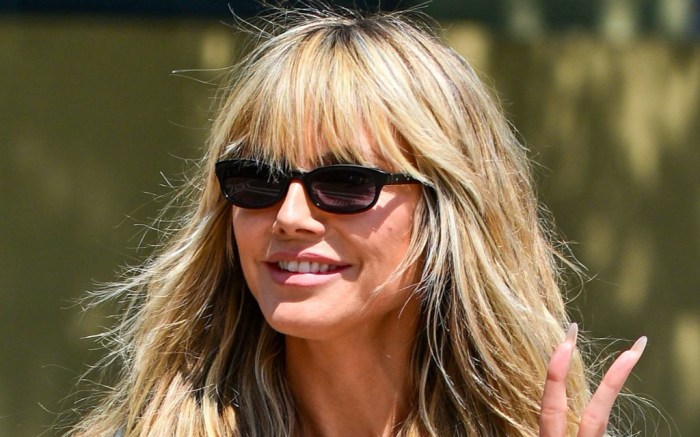 Heidi Klum arrived to film the newest season of “America’s Got Talent” in cozy style.

The iconic supermodel was spotted in Pasadena, Calif., with Sofia Vergara and Howie Mandell, wearing a food-printed set by Moschino. Featuring light blue sweatpants and a matching “Moschino” logo hoodie, the matching athleisure included an allover print of foods like ice cream sundaes, cantaloupe, hot dogs and French fries. Klum finished her delectable outfit with a black leather Dolce and Gabbana handbag and a pair of thin black sunglasses.

When it came to footwear, the “Making the Cut” host went punk in a pair of R13 combat boots. Her $1,195 Stack style featured black leather uppers with matching laces, as well as stacked 1.25-inch platform soles. The style was finished with slick silver zippers on each counter, as well as red stitching for a bold pop of color.

Combat boots like Klum’s are a year-round closer staple, adding a boost of grunge to any ensemble. Lace-up pairs with dark uppers, ridged and platform soles have particularly risen in popularity within the thick-soled trend, as seen in new styles by Schutz, Proenza Schouler and Ganni. Aside from Klum, stars like Camila Cabello, Olivia Palermo and Gwen Stefani have also laced into Giuseppe Zanotti, Dior and Roberto Cavalli combat boots in recent weeks.

The “America’s Got Talent” judge‘s recent shoe lineup has included sleek boots and sandals from brands like Valentino, Dries Van Noten and The Row. When hitting the red carpet and events circuit, she’s also been seen in bold pumps and mules from Gianvito Rossi, The Attico, Femme LA and more top brands. However, her career extends far beyond wearing fashionable shoes; Klum began her career modeling for Victoria’s Secret, Sports Illustrated and Givenchy, and has even founded her own lines of intimates, swimwear, perfumes and clothing with German grocery store Lidl.