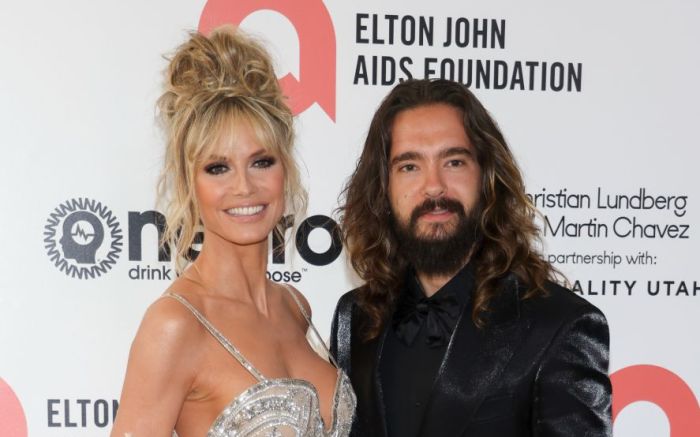 Heidi Klum is swinging the day away in her latest absolutely adorable Instagram video.

The “America’s Got Talent” judge posted a video of her and her husband swinging on an outdoor rope swing having the time of their lives. Klum, 48, is married to Tom Kaulitz, a 32-year-old German musician who is a member of the band Tokio Hotel.

The video is set to Mariah Carey’s “Always Be My Baby,” so it seems the two are quite literally over the moon with one another. Klum is wearing a bold pattern-on-pattern outfit by Libertine that features blue and white pants and a corresponding top. Completing her ensemble were Christian Louboutin booties, featuring a cheetah-printed pattern with pointed toes and 3.34-inch heels.

Kaulitz balances out her bold look with white pants, a white button-up and black slip-on shoes. The two are swinging while facing each other and appear to be absolutely cackling with laughter.

The two were married in 2019 on a luxury yacht off the coast of Capri, Italy. While it was certainly a luxe affair, it still managed to perfectly capture Klum’s whimsical vibe. The model donned a stunning off-the-shoulder gown but decided to forego shoes, which makes sense when you scope out the laid back and loving vibe of the couple.

When Klum isn’t on the set of her new Amazon Studios show “Making the Cut,” she lives in Los Angeles with Kaulitz. The two were most recently spotted looking absolutely glamorous at Elton John’s Oscars party, where Klum donned the most gorgeous embellished mini dress along with crystal-encrusted strappy heels. Kaulitz also glistened in a stunning satin black suit.

Discover Klum’s top looks from the red carpet in the gallery.