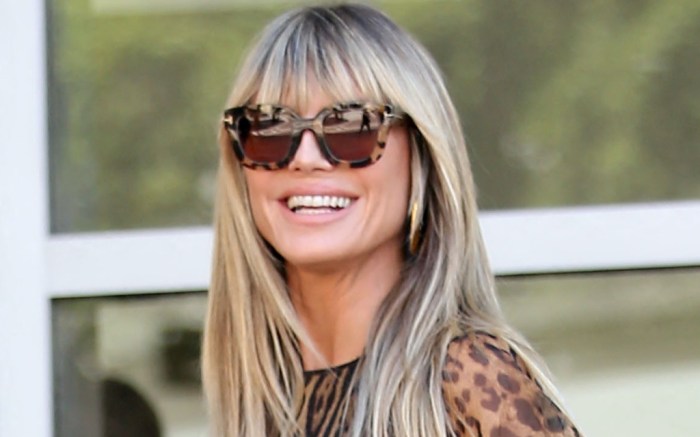 Heidi Klum’s latest statement look for “America’s Got Talent” was utterly wild — and affirmed her love for a very specific print.

While filming the competition show in Los Angeles, the television personality stepped out in a flowing midi dress. Her short-sleeved number featured a puff-sleeved blouse, high-waisted briefs and slim midi skirt, all covered in a brown and black leopard print. The piece gained added drama from a black pleated tulle skirt that flared out near its hemline. Finishing Klum’s ensemble was a pair of matching brown sunglasses, as well as a similarly printed tote bag trimmed with brown leather.

When it came to footwear, the “Germany’s Next Top Model” host opted for a set of pumps to match her attire. Her style featured a pointed-toe silhouette with PVC uppers. Giving the set a sultry edge were two thin black leather buckled slingback straps, as well as matching 4-inch stilettos heels. Giving the pair a monochrome finish to her outfit was an allover leopard print, adding to their allure.