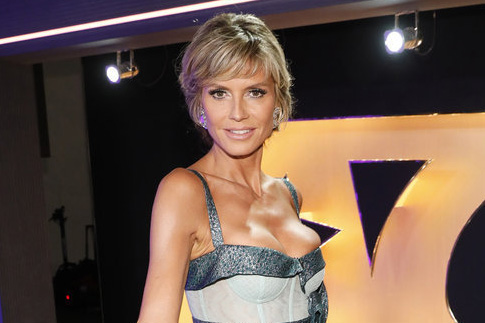 Heidi Klum’s latest statement look for “America’s Got Talent” took a turn for the formal — in fact, it was utterly ready for the prom.

For the occasion, the television personality stepped out in a voluminous gown, as seen on Instagram. Klum’s prom outfit prominently featured a calf-length Dolce and Gabbana gown, which included a deep green tulle skirt and light green corseted bodice.

Adding to the dress was a dark sparkly silver trim on its neckline, straps and waist, cinched with a massive bow with a crystal buckle. Klum accessorized with sparkly crystal post earrings.

When it came to footwear, the “Germany’s Next Top Model” host opted for a set of silver sandals to complete her prom outfit. Klum’s metallic pair featured thin platform soles and 4-5-inch stiletto heels for a slick height boost. Completing her outfit with a dash of prom-worthy sparkle were silver crystals, embellishing the set’s toe and ankle straps.

Klum’s ensemble even inspired a humorous post by her co-host Howie Mandel, joking on his Instagram Stories that she was “taking me to the prom.”

However, this wasn’t the only moment Klum stepped out in sharp heels this week. Prior to filming, the star was spotted in Pasadena wearing sharp black leather mules with a matching belted jumpsuit and Hermés Birkin satchel.