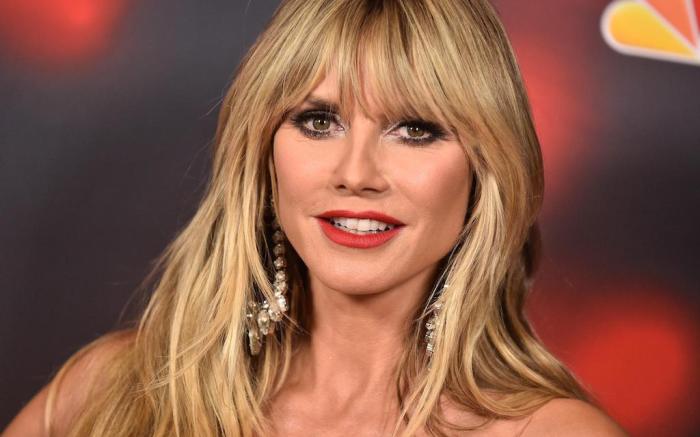 Heidi Klum hit the runway while behind-the-scenes of “Germany’s Next Topmodel.”

The German supermodel touched down on a mirrored runway on Instagram, which featured a black-and-white backdrop printed with her face. Klum wore a black-and-white tie-dye Philipp Plein dress for the occasion, which included a plunging neckline, thigh-high slit and strong shoulders. The flowing piece was paired with a matching coat, which Klum removed halfway down the runway. The model completed her look with a flashy red manicure, layered chokers, stud earrings and aviator sunglasses.

For footwear, Klum’s ensemble was streamlined with a pair of slick thigh-high boots. The style featured black suede uppers, as well as sharp pointed toes. However, their most daring element came from stiletto heels, which appeared to total at least 4 inches in height. The style instantly boosted Klum’s look while elevating her ensemble with matching tones.

Thigh-high boots like Klum’s add a daring element to most ensembles. Featuring stretchy uppers in neutral tones, most pairs also include pointed toes with block or stiletto heels for an edge while retaining fuller coverage. In addition to the “Making the Cut” host, stars like Kim Kardashian, Hailee Steinfeld and Rosie Huntington-Whiteley have also slid on thigh-high pairs by Casadei, Proenza Schouler and Vetements x Manolo Blahnik in recent weeks.

The “America’s Got Talent” judge‘s recent shoe lineup has included sleek boots and thong sandals from brands like R13, Dries Van Noten and The Row. When hitting the red carpet and events circuit, she’s also been seen in bold pumps and mules from The Attico, Femme LA and Dolce and Gabbana. However, her career extends far beyond wearing fashionable shoes; the star began her career modeling for Victoria’s Secret, Sports Illustrated and Givenchy, and has even founded her own lines of intimates, swimwear, perfumes and clothing with German grocery store Lidl.

Elevate your next look with sleek black boots.