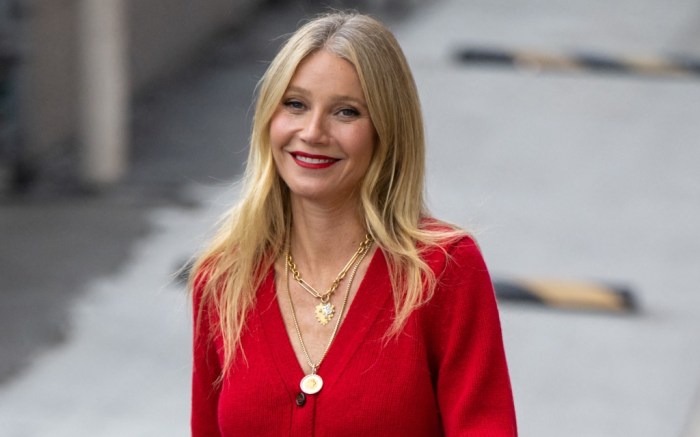 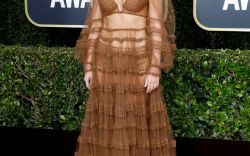 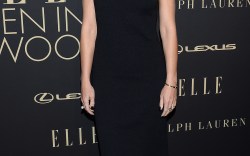 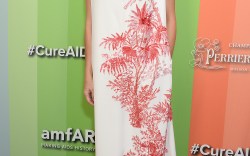 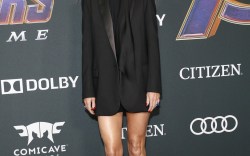 Gwyneth Paltrow was photographed arriving at the ABC studios ahead of her latest appearance on “Jimmy Kimmel Live!” The actress was part of the talk show’s Halloween episode and dressed as “Gwynnie the Pooh” for her interview.

Before recording her interview, the Oscar-winning actress took a casual approach to dressing and walked on-set in a comfortable ensemble, featuring black knee-length shorts. Layered atop was a red ribbed cardigan, given a chic spin with a matching wide fabric-covered buckled belt and glossy black buttons.

When it came to footwear, the Goop founder strapped into a pair of Birkenstock sandals. Her Arizona style, part of the brand’s Il Dolce Far Niente, featured black leather uppers with two thick straps, each accented with a large gold buckle. Flat ridged soles in a matching black hue finished the set, giving it a chic base that was practical and comfortable. Though the set isn’t currently available, its predecessors — Birkenstock’s Arizona and Arizona Big Buckle sandals — can be found in a wide range of colors and finishes at retailers including Saks Fifth Avenue.

The “Shakespeare in Love” actress often opts for whimsical and slick footwear on the red carpet. Her ensembles are frequently paired with neutral, colorful or embellished stiletto sandals or pumps, hailing from luxury brands including Le Silla, Alexandre Birman and Gucci. She’s also been known to sport chic boots for formal occasions, like recent styles by Larroude. Off-duty, Paltrow’s footwear is equally wide-ranging, encompassing Alexander McQueen and Hoka One One sneakers, Roger Vivier loafers and Birkenstock sandals.

PHOTOS: Discover Paltrow’s red carpet style over the years in the gallery.