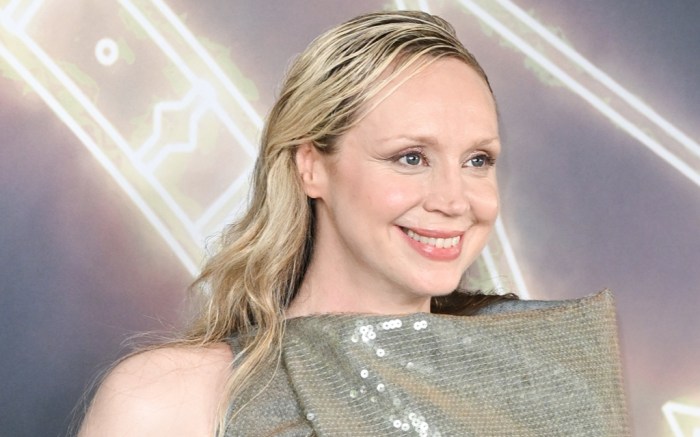 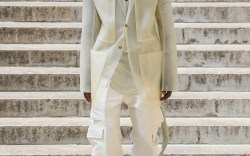 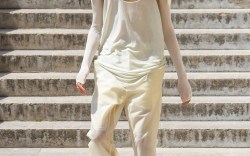 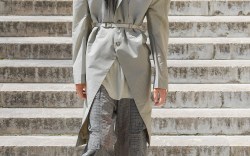 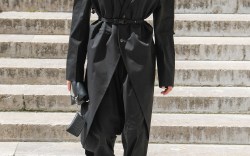 Gwendoline Christie brought formal grunge glamour to the red carpet for the world premiere of Netflix’s “The Sandman.” The fantasy series, based on the Neil Gaiman’s ’90s comic book series of the same name, is now on the streaming platform.

While arriving on the red carpet at London’s BFI Southbank, Christie wore a glamorous gown designed by Rick Owens. Hailing from the designer’s Fall 2022 ready-to-wear collection, the “Star Wars” actress’ ensemble featured a dark beige top with allover sequins. Giving the piece an edge was an asymmetric construction with cinched and loose draping, as well as a sharply pointed right sleeve that dramatically extended past Christie’s hand. Completing the gown was a floor-skimming denim skirt with an ombre beige-to-navy palette, as well as stonewashed texture and frayed hem for a grungy finish. A diamond ring finished her outfit.

For footwear, the “Game of Thrones” star’s outfit was complete with a set of suede pumps. The pointed-toe pair featured pale gray uppers, as well as triangular toes. slightly flared stiletto heels totaling at least 4 inches in height finished her outfit, adding a hue that complemented her dress’ beige and navy tones for a modern, textured take on color-blocking.

An avid fashion lover, Christie serves as a muse for designers including Owens, Kim Jones and her husband, Giles Deacon. The star often attends New York, London and Paris Fashion Weeks, has virally modeled on runways for Tomo Koizumi, Miu Miu and Vivienne Westwood, and even won a British Style – Red Carpet Ambassador award at the 2015 British Fashion Awards. When it comes to shoes, Christie’s go-to style is pointed-toe pumps in a range of neutral and jewel tones, often from Manolo Blahnik — though she’s also slipped into platform, peep-toe and sandal styles. She’s also been seen on and off-duty in heeled loafers and boots from a variety of top brands, including Gucci and Loewe.