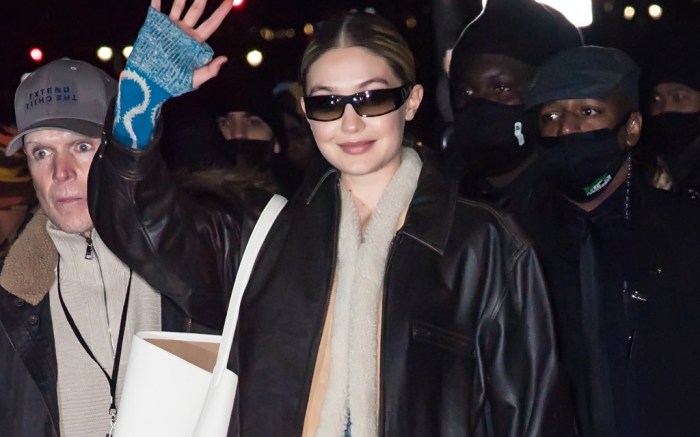 Prior to walking in the show, Hadid arrived in a black leather coach jacket layered over a shearling vest and crop top. The outerwear included a sharp pointed collar, further elevated by contrasting with her white pants. Hadid’s ensemble was finished with a pair of blue fingerless gloves, as well as thin sunglasses.

When it came to shoes, Hadid strapped on a pair of combat boots. Her style featured rounded toes and brown leather uppers, as well as yellow laces. The style’s thick soles also provided a practical element, with calf-high uppers adding greater coverage as well. The pair created a head-to-toe neutral look, while also affirming Hadid’s preparedness for winter.

Lace-up boots are one of the sleekest versions of staple fall and winter ankle boots to wear. Most pairs, like Hadid’s, feature thick soles that are both practical and slick. Aide from the model, stars like Nicky Hilton, Whitney Port and Khloe Kardashian have also strapped into boots by Sergio Rossi, Chloé and Gucci in recent weeks. Hadid’s worn numerous pairs herself—and the same style was even spotted on the model earlier this week.