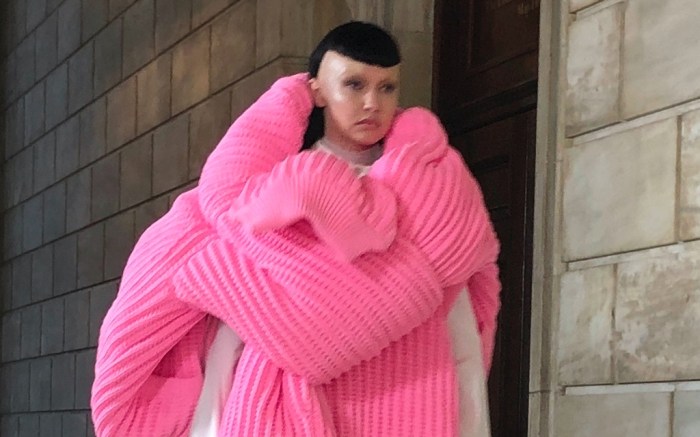 While strutting through the library, the supermodel wore a white collared top with exaggerated proportions over a gray midi-length vinyl skirt. However, what made the greatest statement was an even more dramatic garment — a massive bright pink knit sweater, knotted around Hadid’s front to create an abstract textured appearance. Completing her ensemble was a now-viral beauty look: a shaved head and blunt cropped bangs dyed jet black. However, the edgy appearance was actually created through prosthetics by hairstylist Duffy and a team of artists.

Hadid’s runway footwear was also viral, taking the form of one of Jacobs’ most sought-after shoe styles: the Kiki boot. Cast in white leather with a calf-high silhouette, the revival style included its’ mid-2010’s predecessor’s platform soles, towering block heels and buckled front straps. The goth-inspired footwear, layered over sheer white socks, added an element of eclecticism and boldness to Hadid’s layered outfit. It also continued the style’s trajectory; every model wore a pair on the runway, and vintage pairs have been seen on Olivia Rodrigo, Rihanna, Ariana Grande and Halsey in recent months as well.

The Fall 2022 Runway Marc Jacobs collection highlighted core garments — including jeans, cardigans, utility jackets, blazers and gowns — in oversized shapes with a palette of greens, blues, purples, pinks, black and white. His line incorporated elements of protection through fashion, while still remaining quirky and tongue-in-cheek from its silhouettes and colors. For added flair, aside from its viral NYPL setting, Jacobs also broadcasted the fashion show throughout Times Square — cementing it as a true New York moment. The designer also referenced Roe V. Wade’s overturning in his show notes, remarking on the importance of choice through quotes from the philosopher Nietzsche. “We share our choices in contrast to the ongoing brutality and ugliness of a world beyond our insulated but not imperishable walls,” they stated.

You can watch Jacobs’ full Fall 2022 Runway collection show on YouTube, below.