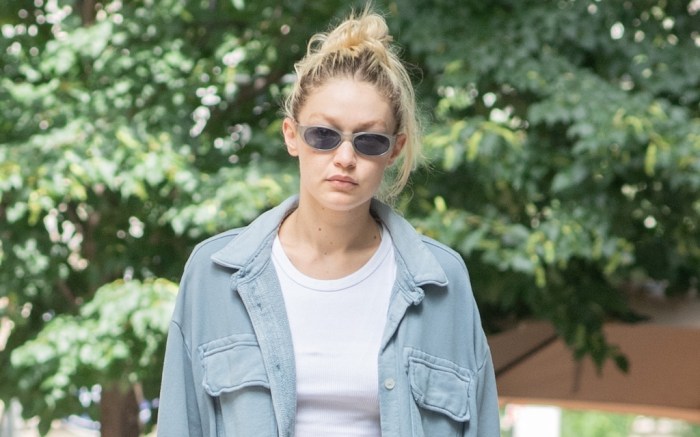 Gigi Hadid took to the streets of New York City in minimalist style while strolling along this week.

The supermodel took an afternoon walk in the city’s SoHo neighborhood, wearing a pair of khaki trousers. The preppy pair gained a nonchalant spin when paired with a white crewneck crop top. Hadid layered the pieces to ward off summer winds in a pale blue collared sweatshirt by Cotton Citizen. The star’s $245 Brooklyn Button-down style included a raw-edged hem, two pockets and large front buttons a cozy and utilitarian finish, appearing like a thick collared shirt. Finishing her look were dark sunglasses, a top knot hairstyle and beige leather top-handle bag by Loro Piana.

When it came to shoes, the Versace model went casual in a pair of white sneakers. Her Reebok pair featured layered uppers with monochrome laces, as well as flat rubber soles. Completing the pair were white and green logo-embroidered tongues, adding a faintly retro finish to Hadid’s off-duty outfit.

Sneakers like Hadid’s are a year-round trend due to their ease and versatility. Monochrome styles with suede, canvas and leather uppers are especially popular during the summer months, like new pairs by Converse, Cariuma and Superga. Aside from the model, stars like Kylie Jenner, Vanessa Hudgens and Jisoo have also laced into Nike, Naked Wolfe and Amiri sneakers in recent weeks.