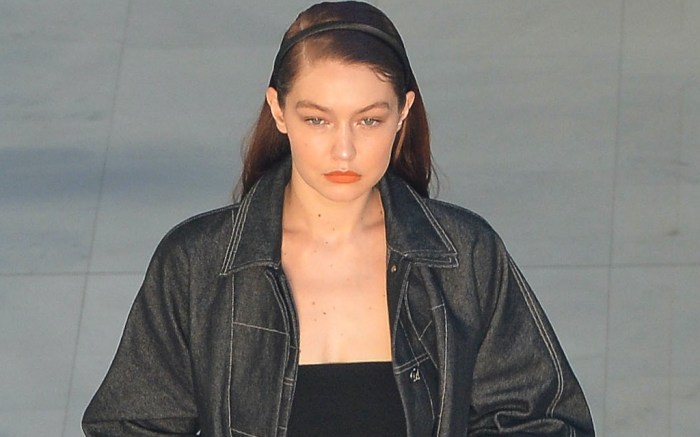 Gigi Hadid bundled up for an outing in New York City—where she discovered her own magazine cover.

The model posed outside of a magazine store, which featured a window filled with her newest cover of “V.” Hadid wore a light brown blazer over a beige sweater and white top for the occasion, pairing numerous neutral tones together for one uniform look. The star paired the tops with dark brown trousers, which included front pleats and V-shaped slits. Her look was complete with a tan overcoat, leather gloves and tortoiseshell-framed sunglasses.

When it came to shoes, Hadid strapped on a pair of combat boots. Her style featured rounded toes and brown leather uppers, as well as yellow laces. The style’s thick soles also provided a practical element, with calf-high uppers adding greater coverage as well. The pair created a head-to-toe neutral look, while also affirming Hadid’s preparedness for winter.

Lace-up boots are one of the sleekest versions of staple fall and winter ankle boots to wear. Most pairs, like Hadid’s, feature thick soles that are both practical and slick. Aide from the model, stars like Nicky Hilton, Whitney Port and Khloe Kardashian have also strapped into boots by Sergio Rossi, Chloé and Gucci in recent weeks. Lace-up shoes are an off-duty staple for Hadid, who wears the style across sneakers and boots year-round.